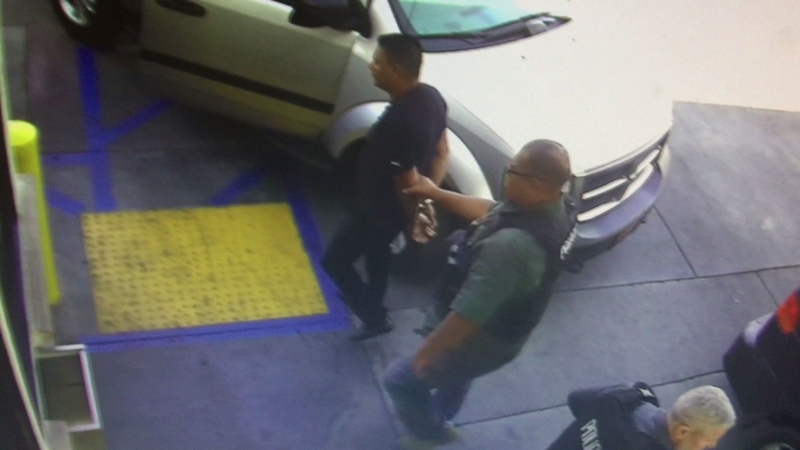 SAN BERNARDINO, Calif. -- A man driving his pregnant wife to the hospital for a scheduled C-section was detained by ICE agents when he went to get gas at a nearby station in San Bernardino.

On Saturday, ICE said the man was detained because of an outstanding warrant in Mexico on homicide charges.

The incident was caught on surveillance video Wednesday at the gas station, which showed ICE agents surrounding the couple's minivan as they pulled into the business. The couple were asked to provide identification and when 36-year-old Joel Arrona-Lara could not provide his, agents took him into custody.

In surveillance video from inside the convenience store, Lara's wife, Maria del Carmen Venegas, is seen in tears as her husband is taken away. She said she was able to provide identification, but her husband had left his at home.

In addition to the newborn, the couple has four other children. She said she is worried about what could happen because her husband is the sole provider for the family.

Russell Jauregui, an attorney with the San Bernardino Community Service Center, said the incident could have been done differently.

"That's what bothers us the most. We know that under the current Trump administration that everyone is a priority, but in this case when a person is taken whose wife is having a C-section, this could have been handled we believe a lot differently...but not just detain him while his wife is on the way to get a C-section," he said.

"Arrona-Lara remains in ICE custody, and the agency issued a statement regarding the incident. They later added that Arrona-Lara was taken into custody on the outstanding warrant.

Mr. Arrona-Lara was brought to ICE's attention due to an outstanding warrant issued for his arrest in Mexico on homicide charges.

"ICE continues to focus its enforcement resources on individuals who pose a threat to national security, public safety and border security. ICE conducts targeted immigration enforcement in compliance with federal law and agency policy. However, ICE will no longer exempt classes or categories of removable aliens from potential enforcement. All of those in violation of the immigration laws may be subject to immigration arrest, detention and, if found removable by final order, removal from the United States."

Arrona-Lara's legal defense team said they are going forward with filing document to get him released on bail. According to the team, the allegations from Mexico are unconfirmed and he has no criminal record in the U.S.

His defense team issued their own statement to ABC News.

"Mr. Arrona denies any criminal history in Mexico and he is unaware of any criminal proceedings in Mexico in which he is named as a defendant. The family denies allegations as well. In the charging documents he is charged with being in the country without documents. He is not in extradition proceedings," it said.