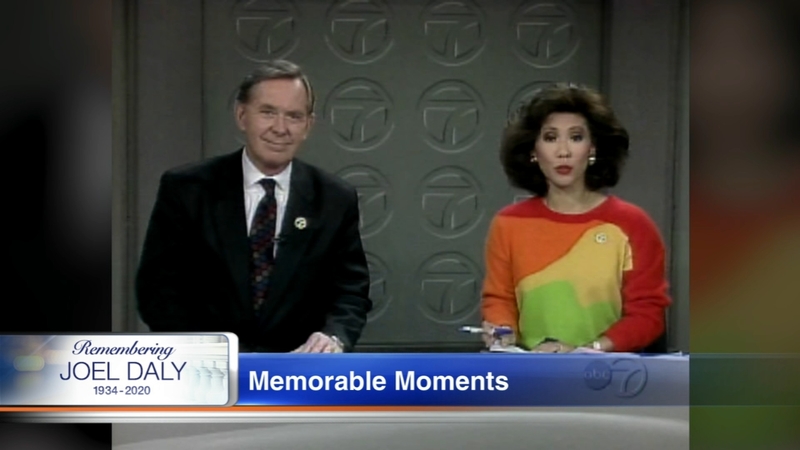 CHICAGO (WLS) -- ABC 7 Chicago colleagues and friends and remembering Joel Daly, who worked at the station for 38 years, for his career, influence -- and yodeling.

Daly died Thursday morning after a long illness. He was 86.

"Joel Daly was a household name in Chicago for nearly four decades. He represented the connection between generations of ABC 7 viewers," ABC7 President and General Manager John Idler said. "The bridge Joel created between the early days of the Flynn-Daly Report to what has become Eyewitness News set the standard for excellence. Joel will be missed for many things, chief among them was his proud Irish heritage that was always on full display during the station's St. Patrick's Day Parade broadcasts. Simply put, he is a legendary part of Chicago broadcast news history. We extend our deepest sympathies to his family."

Roz Varon said she had many happy memories of Daly.

"He just had a personality the size of Alaska," she said.

He enjoyed being on stage and walking in St. Patrick's Day parades, Varon said Thursday.

Jim Rose said Daly welcomed him with open arms when he joined ABC 7 Chicago in 1982, and called Daly "one of the great titans of broadcasting."

1 of 2 One of the great titans of broadcasting, Joel Daly passed away this morning. When I came to ABC7CHICAGO in 1982, he welcomed me with open arms. I loved his wit, his voice, his character. AND MAN COULD HE SING!!! And lest we forget he was a true renaissance man.

2 of 2 Joel Daly became a lawyer near the end of his broadcasting career so he never stopped learning. He will be missed. My heart goes out to his family. R.I.P. big fella.

When Daly announced his retirement, fans across Chicago talked about how much he meant to them.

So very sad to hear of the passing of Joel Daly. Immediately, he was a favorite of mine. He indulged my love for the #AllMyChildren #OneLifetoLive #GeneralHospital & we did #SoapScoop for years on @ABC7Chicago News at 11. I adored him. Much love & respect for this man. pic.twitter.com/mfBdpqw13I