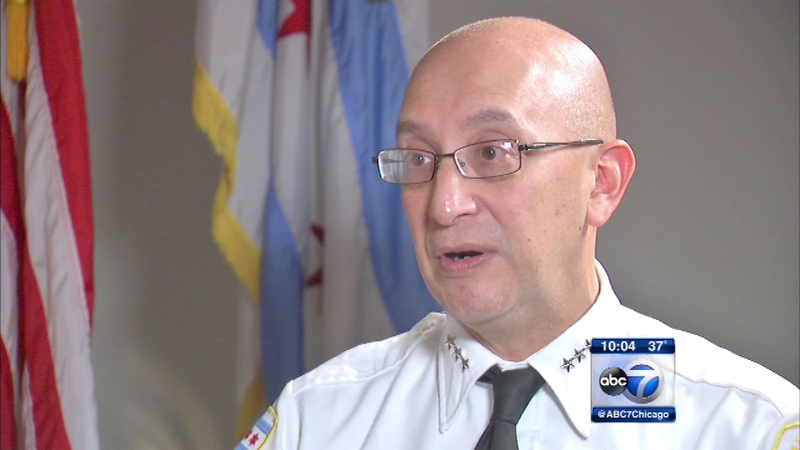 CHICAGO (WLS) -- Interim Chicago Police Superintendent John Escalante opened up about everything from understanding the pressures of the new position, to the public's mistrust of the police department, to building bridges to attract more applicants that appropriately reflect the makeup of the city he wants to serve.

Escalante said he's put in his time working his way up the ranks, and despite the turmoil and calls for a major overhaul of the Chicago Police Department, he would like to make his temporary job as top cop permanent.

"Coming up through the ranks, yeah, that was something that I always thought about. And now that I'm doing it on an interim basis, it's definitely something I'll be considering as I move forward," he said.
EMBED More News Videos

Chicago's interim top cop John Escalante is opening up about his new position with the Chicago Police Department.

Escalante, a 29-year veteran of the department, does not see his insider status as a negative. The last two chiefs have been outsiders. So, how would his leadership differ from that of Garry McCarthy?

"The only thing I can think about right now is to get out, as much as I can, a little more, out in the field with the men and women of the police department," he said.

Escalante said that he did see the video of Officer Jason Van Dyke shooting Laquan McDonald 16 times two days after it happened. He says he has not talked to Officer Van Dyke about what happened. He plans to meet with the Fraternal Order of Police soon.

"And that's another thing I want to get done next week, is to sit down with the FOP president and his key people, and talk about what we can do to move forward," Escalante said.

Escalante is proud of his Mexican heritage. He talked about how his grandparents worked for the railroad and living out of a box car instilled a strong work ethic and dedication.

"My dad was born in a boxcar in Texas because my grandfather worked on the train, and it's not uncommon when you look at the history. Mexican families who worked on the train literally lived in boxcars, the railroad companies gave them boxcars to live in. So I'm very proud of where we have come from," Escalante said.

Escalante said he wants to meet with the rank and file, as well as residents, about building trust. Escalante also welcomes calls for a federal probe of the department.

He said the Department of Justice is currently here through the Violence Reduction Network, and he welcomes any review so public can be reassured that this is a professional department committed to accountability.