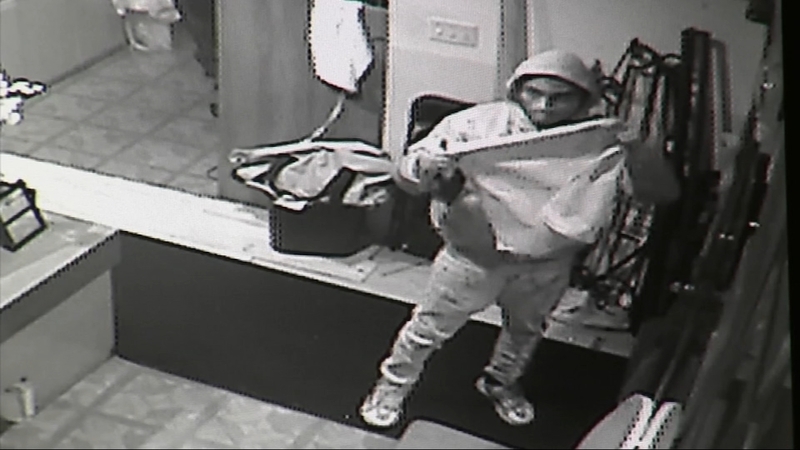 CHICAGO (WLS) -- Chicago police are looking for the person who broke into Josephine's Southern Cooking in the city's Chatham neighborhood, and the restaurant's owners believe they know who he is.

Police said they responded to a burglary in the 400-block of East 79th Street at about 3 a.m. Tuesday. An employee of the restaurant told police he had come into the business and noticed the rear door open and various items missing inside.

Surveillance video captured the suspect ransacking the restaurant for between 40 and 45 minutes. He can be seen on video kicking in the back door of the business just before 2 a.m.

"He took his time and he was a one man show too, he did everything by himself, too, no accomplices," said Victor Love, co-owner of Josephine's Southern Cooking.

Once inside, the man ransacked a back office, took a computer and two flat screen televisions, and stole several bikes from the basement that were part of a holiday toy drive collection the restaurant's owner's son has organized for years. Cash was also taken from a drawer.

The suspect did not cover his face at all times, but did hide behind a napkin when he ransacked the back office.

"His face is not even covered and he's trying to tie the napkin on and it's not long enough to really make a tie," Love said.

All of his movements were captured on surveillance video.

The restaurant is now missing thousands of dollars' worth of equipment but the worst part, according to the owners, is that they believe the suspect is somebody they have helped over the years.

"We have fed this kid, we have given this kid money," said Love.

Josephine's Southern Cooking has been burglarized once before, in May of 2018 when it was known as Captain's Hard Times Dining. In that incident it was stripped of copper wiring.

"It just hurts when, you know, you extend that kind of love and compassion on a person and they come back and do this to you," he said.