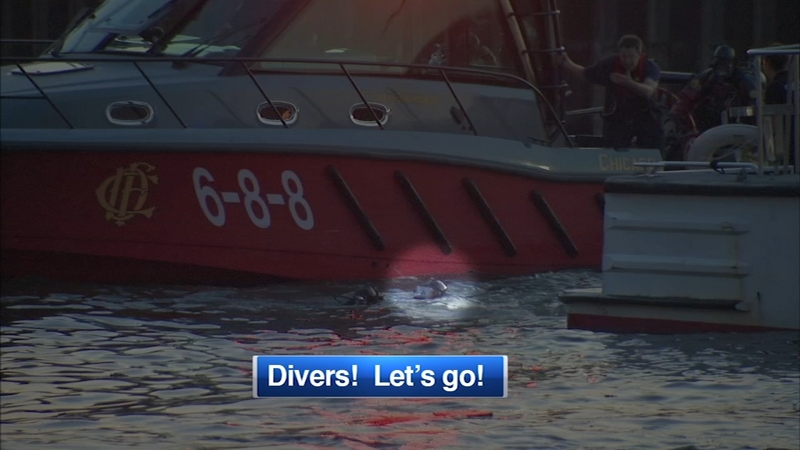 CHICAGO (WLS) -- An investigation continued Wednesday into how Juan Bucio, a veteran Chicago Fire Department diver, died during a rescue attempt on the Chicago River on Memorial Day.

Bucio, 46, died while searching for boater Alberto Lopez, 28, who still has not been found after falling into the Chicago River's South Branch.

A closer look at video, shot by an ABC7 photographer moments before Bucio disappeared under the water, shows him and his partner in trouble as a fire department boat comes by.

A source said that something may have been wrong with Bucio - a 15-year CFD veteran -- before he went under. A source said the video shows Bucio too low in the water, signaling a possible sign of trouble.

As crews on the boat called out to Bucio and his partner, the video shows Bucio go under the front of the boat while his partner puts his hands on the side to prevent himself from following.

Then there is a frantic search. Later, rescue crews pulled Bucio's body out of the river.

An investigation is being conducted to find out why CFD diver Juan Bucio died while a rescue attempt in the Chicago River.

The Chicago Fire Department is now waiting for preliminary results from the Cook County Medical Examiner's Office which would tell them if Bucio sustained an injury that could have caused him to lose consciousness or if he may have suffered from a medical problem before he went under the boat, a source said.

The incident happened after both divers had been in the water for a while looking for the missing boater.

"They were searching for a person or persons in the water. An order was given to switch out divers to bring the second team in, give them a break. At that time they were coming towards the boat, his partner turned around and he was missing, that quick," said Jose Santiago, the CFD fire commissioner, at a Tuesday news conference.

As part of an investigation, Bucio's equipment is being analyzed, his air pressure tank is being checked and everyone who had contact with him before and during the incident is being interviewed, according to a source.

"Talking to the diver, he was face-to-face with him, he was looking at him, turned around, went back to talk to him, and he was gone," Santiago also said in that Tuesday news conference.

Visitation for Bucio will be held 3 p.m. to 9 p.m. Sunday at St. Rita High School at 7740 South Western Avenue on Chicago's Southwest Side. A visitation will be held Sunday from 3 p.m. to 9 pm.. A funeral Mass will be held Monday at noon. Burial will follow at Mt. Auburn Cemetery, 4101 S. Oak Park Ave., Stickney.

On Wednesday, Bucio's body was taken to a funeral home in Oak Lawn. Police and firefighters were there to pay respects, saluting as his flag-draped body passed by.

Tuesday night, the Ferris wheel at Navy Pier was lit up in honor of Bucio. In the Garfield Ridge neighborhood where he lived, red ribbons were wrapped around utility poles in his memory.

Colleagues remembered Bucio, a former lifeguard for the Chicago Park District, as an excellent swimmer, diver, athlete and team player who pushed others to be their best

Bucio is a father of two sons, ages 7 and 10. He is also one of ten children, two of whom currently serve the city. His brother is a Chicago firefighter and his sister is a Chicago police officer.

The search for Lopez, the missing boater, is now a recovery mission.