Illinois Comptroller Judy Baar Topinka died at the age of 70 after a stroke.

Spokesman Brad Hahn said Topinka reported discomfort Tuesday morning and was admitted to MacNeal Hospital in west suburban Berwyn. After undergoing tests, she appeared to be doing well. However, overnight she suddenly lost consciousness and was pronounced dead shortly after 2 a.m. Wednesday.

"This was not going to be an easy race, and that's the way it turned out," Topinka said after the election results came in. "We were watching right to the end. I'm just happy because I have four more years to get things done."

BULLDOG IN A POLITICAL WORLD OF COCKER SPANIELS

"The Illinois political scene lost its Polka Queen last night and I lost a friend. Judy Baar Topinka was one of a kind," U.S. Senator Dick Durbin said. "In a political world of cocker spaniels she could be a bulldog taking a bite out of both Democrats and right-wing Republicans without missing a beat. She was a blue-collar, immigrants' kid who lit up the room with her quick wit and boundless energy."

"Judy was an institution in Illinois politics," U.S. President Barack Obama said. "Her public service spanned more than 30 years, including her tenure in the State Legislature and as Chair of the Illinois Republican Party. Judy was a fierce advocate for her constituents, which I got to see firsthand when she was State Treasurer - the first woman to hold that office. She was blunt, pragmatic, unfailingly cheerful and energetic, and always willing to put politics aside to find commonsense solutions that made a difference for the people of Illinois. She will be greatly missed."

Topinka was an advocate of women's rights and gay rights, which sometimes put her at odds with her party.

"It takes both parties to make something happen. When we work together, look what we can do," Topinka said when same-sex marriage passed in Illinois. Then she offered her services as flower girl.

"Never without her signature sense of humor, Judy was a force of nature. She left her mark on the state she has called home her entire life. Her leadership improved Illinois and paved the way for countless women in politics," Governor Pat Quinn said.

Quinn, a Democrat, will appoint Topinka's replacement. The Illinois Constitution states the new comptroller will serve until the next statewide election, which is scheduled for 2016.

VIDEO: Who will replace Topinka?

Topinka grew up in west suburban Riverside and lived there until she died. Topinka is survived by her only son, Joseph; daughter-in-law, Christina; and granddaughter, Alexandra.

Topinka's office tweeted from her account (@CompTopinka) Wednesday morning: "We at the Comptroller's Office know that Comptroller Topinka would be flattered & humbled by all of your tweets today."

The outspoken and dedicated public servant had a history-making political career in Illinois.

"For more than three decades, she brought a relentless work ethic, a determination to attack our state's fiscal challenges, and a sense of humor and smile that brightened the day of anyone in her path," Mayor Rahm Emanuel said Wednesday.

"Judy Baar Topinka was not just a wonderful person but a true public servant because she focused more on people than politics. She genuinely cared, " said former Mayor Richard M. Daley. Topinka assisted him in his first run for Cook County State's Attorney.

Topinka was elected state representative in 1980. She went on to win office as a state senator four years later.

In 1994, she became the first woman elected Illinois State Treasurer. She kept the office in the 1998 election, making her the first woman re-elected to a statewide office. She served as state treasurer for a total of three terms.

Topinka was first elected comptroller in 2010, making her the first woman to be elected to two state constitutional offices.

She was a former Illinois GOP chairwoman and ran for governor in 2006. She said the temporary income tax increase should be phased out so that the state "keeps its promise without blowing a multi-billion hole in its budget."

During the comptroller's latest campaign, Topinka likened her job to being a "skunk at a picnic" - a reference to the task of writing checks to a state with a backlog of unpaid bills.

Topinka and Governor-elect Bruce Rauner were the only two Republicans to win statewide races this year after Tom Cross was narrowly defeated in the treasurer's race.

Topinka paved the way for moderate Republicans like Senator Mark Kirk and Rauner.

"Comptroller Topinka's magnetic, one-of-a-kind personality brought a smile to everyone she met, and she had a servant's heart, always only caring about what was best for the people of our state," Rauner said of his "tremendous" friend.

"Judy Baar Topinka was a trailblazer, a true public servant and a friend to all. Always jubilant and straight-talking, Judy spoke her mind on every issue. Even during tough political times, Judy always worked across party lines to get things done and brought humor and joy to everything she did," Illinois Attorney General Lisa Madigan said.

"She was a great leader and a straight shooter who served Illinois with dignity," Illinois Secretary of State Jesse White said, remembering his friend.

"Judy Baar Topinka brought a special approach to every aspect of life. Illinois is a much better place because of her efforts," Illinois House Speaker Michael Madigan said.

Chicago City Clerk Susana Mendoza said Topinka was a "jewel" of a woman and that she admired her friend and mentor's fearlessness.

"I always admired her for her bravery in holding strong to her convictions and beliefs regardless of where her party stood - an example of that being her outspoken support of gay rights. Judy set the bar for what it means to work in a bipartisan way. She was beloved by people on the far reaches of both aisles because she was as genuine a human being as anyone could ever hope to be," Mendoza said. "May her bright light continue to shine."

Cook County Clerk of the Circuit Court Dorothy Brown spoke of her "palpable compassion for people that defined her public service." Brown said Topinka was a diligent advocate of quality education, evident in her creation of the "Bridges" program, which taught children about money and banking, and the Monetary Assistance Program (MAP), which helped young adults attend college. Mendoza said Topinka was also passionate about finding loving homes for animals in need.

"Judy Baar Topinka was a one-of-a-kind public servant known for her integrity, her frankness and her bipartisanship," Illinois Treasurer-elect Mike Frerichs said.

Rep. Mike Zalewski, a Democrat, represents the Riverside community in the Illinois House.

"As a constituent, mentor, neighbor and friend, Comptroller Topinka espoused a no-nonsense governing approach that I and my colleagues would do well to emulate during these difficult times. We came from different political parties, but she made sure those differences never mattered when it came to serving the people of our area and our state," Zalewski said.

"I am saddened by the loss of a dedicated public servant and good friend," State Senator Terry Link said. "The state has suffered a tremendous loss and my deepest sympathy goes to her family in this difficult time." 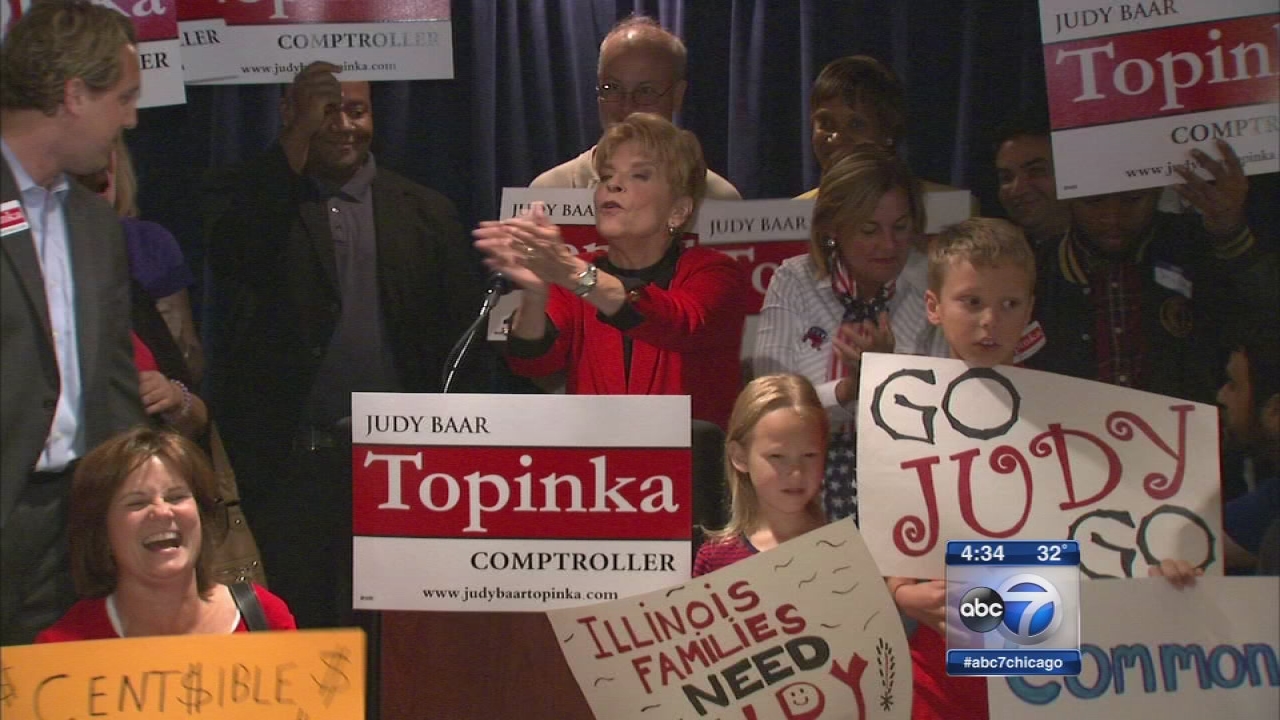 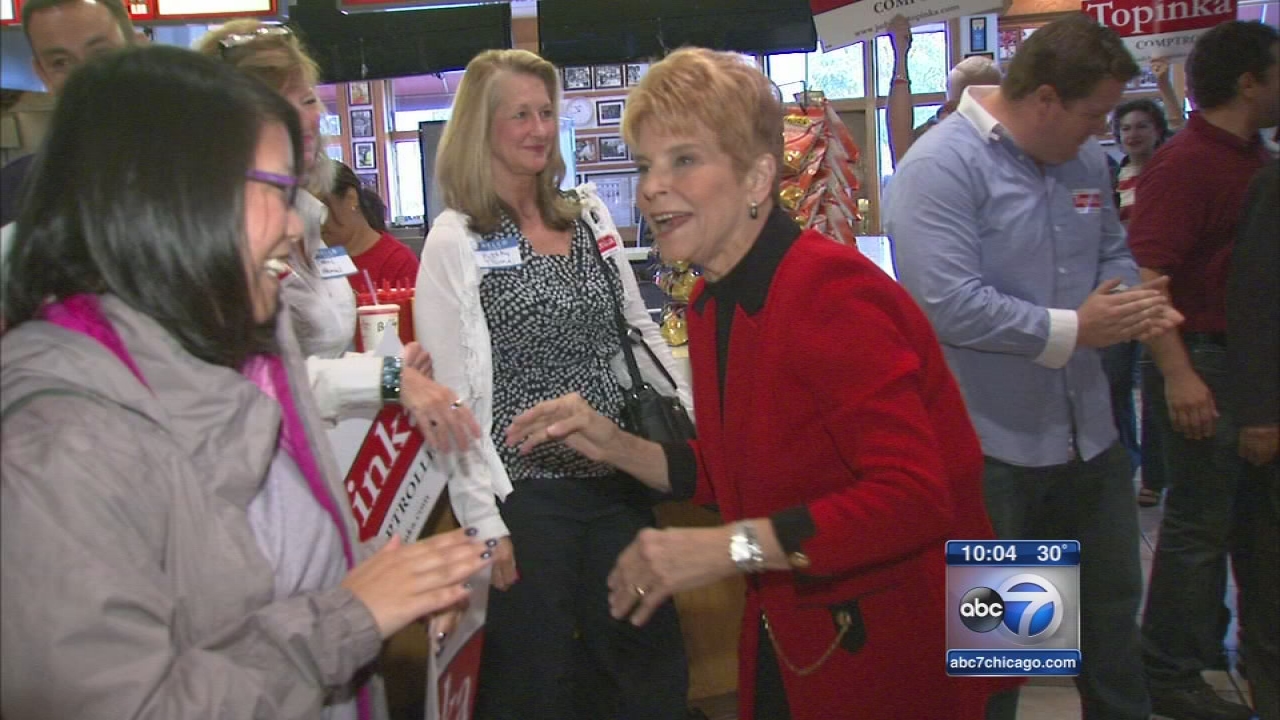