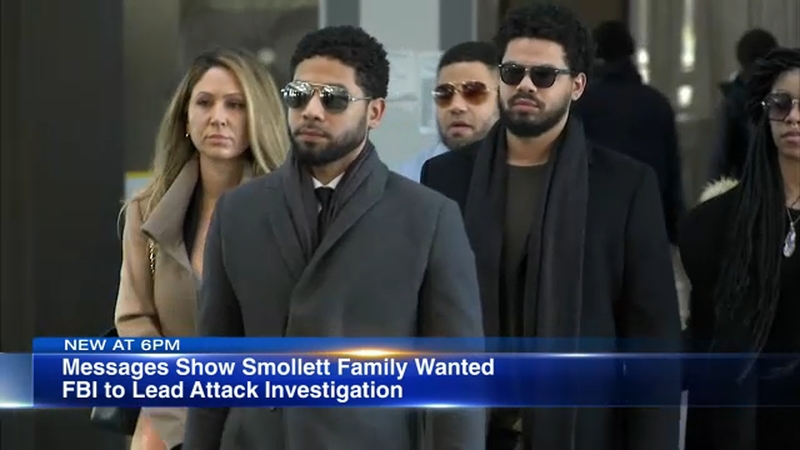 The State's Attorney's Office said she recused herself after having a conversation with a relative of Smollett about the case.

Foxx announced her recusal on Feb. 20, and that same day a spokesperson released a statement to ABC News, telling them, "Out of an abundance of caution, the decision to recuse herself was made to address potential questions of impartiality based upon familiarity with potential witnesses in the case."

According to the text messages obtained by ABC7 from the State's Attorney's office, the Smollett family was worried about leaks in the investigation and reached out to Foxx through a politically-connected lawyer.

The family wanted Foxx to ask Chicago police to request that the FBI take over the lead in the investigation.

In a statement Wednesday afternoon, Chicago Police Spokesman Anthony Guglielmi said, "the FBI was working on that investigation from day one. There was never a point where the FBI could take the entire investigation on because there was no evidence produced to support Smollett's claim of a hate crime."

Smollett is due back in court Thursday, facing 16 felony counts of disorderly conduct for filing a false police report. He denies that he asked two brothers to stage an attack against him.

Smollett was originally charged with one felony count of disorderly conduct for filing a false police report by the Cook County State's Attorney's Office on Feb. 20.

The TV actor claimed he was the victim of a vicious hate crime in the Streeterville neighborhood on Jan. 29. He said two men physically attacked him while yelling racist and homophobic slurs, threw a chemical liquid on him and looped a rope around his neck.

Prosecutors say Smollett paid the Osundairo brothers to pull off the staged attack.