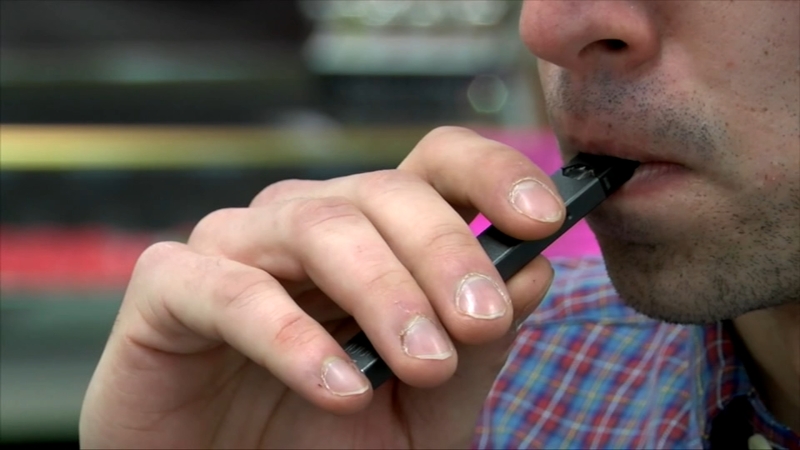 A teen is now taking a stand and raising a red flag about Juuling. He's worried it's becoming a big problem in his community.

"All of the people in my grade started using it," one teen says in the video.

The Juul is a trendy vape pen that heats up liquid nicotine that comes in a variety of flavors.

An eye-opening video is shining a light on the teen use of e-cigarettes - or what they call Juuling - derived from the popular brand name, Juul.

Jack Waxman, 17, produced the video to raise awareness about what he fears has become a big problem with many teens in is community.

"You couldn't be caught dead with a cigarette if you're a teenager. But with juuling, its cool to Juul," Waxman said.

The Juul is a trendy vape pen that heats up liquid nicotine that users inhale. It has capsules or pods that come in a variety of flavors like "cool mint" and "fruit medley," each containing about as much nicotine as a pack of cigarettes. The flavorful pods are seemingly attractive to teen users.

"These flavors are drawing them in and the nicotine is forcing them to stay," Waxman said.

According to a recent study by the American Academy of Pediatrics, an estimated 3 million adolescents in the U.S. currently use e-cigarettes, including those who never smoked.

"Some of my friends have started using cigarettes and it's because they have been Juuling, because they just got so used to Juuling, that they think its ok to use cigarettes," Ferreira said.

"I want to stop, but the habit of Juuling is just so intense," Solomon said.

"My parents didn't know until I got caught and then I just kept using it," Ferreira said.

The student's school told ABC News it is aware of the unfortunate trend, adding that what started small has turned out to be a growing problem.

As for Juul, it says their product was made exclusively for adults looking to quit smoking and is investing $30 million in independent research and youth and parent education. The company said in a statement to ABC News: "We cannot be more emphatic on this point: no young person or non-nicotine user should ever try Juul."

"The more people that know about the problem, the more people can take action and from there we can really make change," Solomon said.

One of the kids interviewed by ABC News said he started using e-cigarettes in the 8th grade. The kids we spoke to said they want to quit, but they haven't.

In a statement to ABC News, the executive director of the Vapor Technology Association said: "The Vapor Technology Association has adopted comprehensive Marketing Standards to ensure that vapor products are kept away from youth. We presented those standards to the FDA in January of this year and have asked the FDA to step up enforcement efforts on marketing. But, no one should lose sight of the fact that vapor products, including JUUL products, are helping tens of thousands of adults reduce if not quit smoking cigarettes. No teen should be using these products."
Report a correction or typo
Related topics:
health & fitnesshealthe cigarettesvapinghigh schoolteenagersu.s. & world
TOP STORIES
4th of July fireworks displays across Chicago area | See full list
54 shot, 7 killed in July 4 weekend violence: CPD
Boy, 10, wounded while inside bedroom in Englewood
5 wounded in Parkway Gardens shooting
Jayland Walker was unarmed when 8 Ohio officers opened fire on him
Motive likely not terror-related in Copenhagen mall shooting
History of Nathan's 4th of July hot dog eating contest
Show More
Tips on keeping pets safe, happy during 4th of July celebrations
How to prevent fireworks-related injuries, fires
1 killed in Little Village hit-and-run
CPD suicide: Officer ID'd by medical examiner
Girl, 6, critically injured after struck by teen riding electric bike
More TOP STORIES News