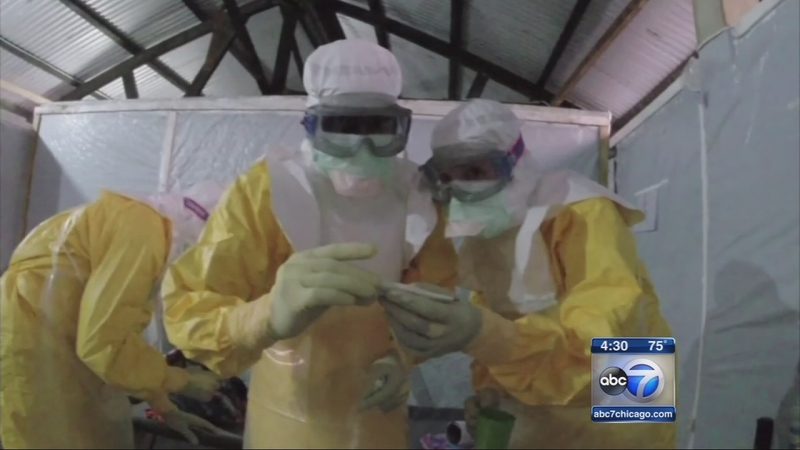 CHICAGO (WLS) -- As a New Jersey nurse who treated Ebola patients is released into home quarantine, doctors meeting in Chicago are discussing the U.S. response to the deadly disease and mandatory 21-day isolation for health care workers returning from Sierra Leone, Liberia or Guinea.

Nurse Kaci Hickox will be released from the hospital in Newark after a 24-hour isolation in which she showed no symptoms. Hickox will be taken in a private carrier to a home in Maine, where she will remain in quarantine for 21 days, following the Ebola protocols put in place for healthcare workers returning to the U.S. from West Africa. Hickox was working in Sierra Leone.

"This is an extreme that is really unacceptable," Hickox said of the quarantine. "I feel like my basic human rights have been violated."

She said she is not sick and tested negative for the Ebola virus. She plans to challenge her quarantine in court.

"I understand that she doesn't want to be quarantined. But my responsibility is for 8.9 million people in the state of New Jersey," Governor Chris Christie said.

Like New Jersey, the Illinois Department of Public Health announced a 21-day home quarantine requirement for those who have had direct contact with an individual infected with the Ebola virus while in Liberia, Sierra Leone or Guinea.

"I think it's common sense. I think it's important for those who have directly interacted with those infected with the Ebola virus, when they do return to the United States, to have a mandatory 21 days period," Illinois Gov. Pat Quinn said.

"Every single day, they have to reach out to a help official and give them temperatures twice a day. Any new symptoms, it may require an actual home visit," Dr. LaMar Hasbrouck, Illinois Department of Public Health, said.

That mandatory quarantine is being met with critics within the medical community, who say the requirement is unnecessary and could discourage medical missions to West Africa.

"These health care workers don't pose a risk. There have been hundreds and hundreds of workers that have gone to the region and returned to their countries and not one has infected anyone else," ABC News Chief Health and Medical Editor Dr. Richard Besser said.

Doctor David Pigott spoke about infectious diseases, including Ebola, at the American College of Emergency Physicians (ACEP) conference at McCormick Place. He doesn't support the rigid quarantines either.

"What emergency physicians in general recommend is twice daily temperature monitoring at home, but not a mandatory quarantine. Again, the National Institutes for Health and Centers for Disease Control mirror that approach," Dr. Piggott said.

The White House is also reportedly urging states to back off of the 21-day quarantine.

According to the World Health Organization, more than 10,000 people have been infected with Ebola in the outbreak that came to light last March. Nearly half of them have died, mostly from Guinea, Liberia and Sierra Leone.

"The biggest effort that needs to be made is controlling the outbreak in West Africa," Dr. Pigott said. "Time and the math involved are not in our favor."