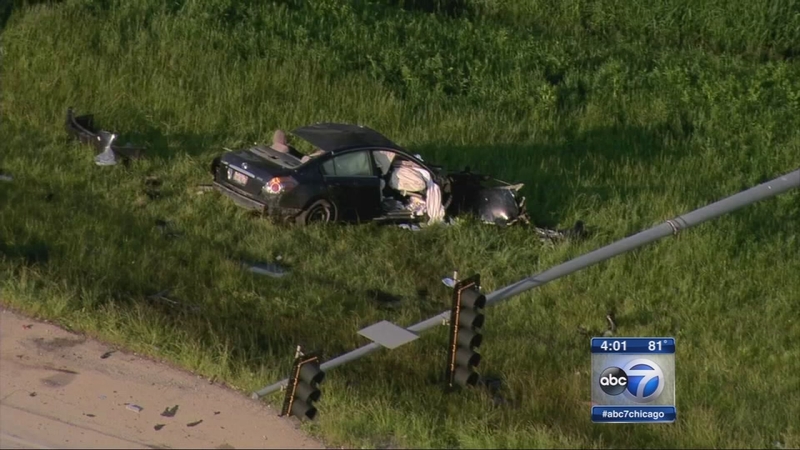 KANKAKEE, Ill. (WLS) -- Three men were killed and another man injured in a single-vehicle crash on Interstate 57 in Kankakee, about 60 miles south of Chicago.

The victims were identified as Lukas Frye, 25, of Milford; Randy Gates, 56, of Kankakee; and Eddie Sarkozi, 43, of Iroquois, according to Kankakee County Coroner Bob Gessner.

Frye, who was the driver, was the only one not wearing a seatbelt.

The lone survivor was hospitalized Monday evening at Presence St. Mary's Hospital, where he underwent surgery for his injuries. He was listed in serious condition, but expected to be OK.

At about 5 a.m. Monday, the victims were in a Nissan Altima traveling southbound at a high speed when they struck a light pole. The car careened down an embankment and landed in a ditch in a mangled heap, about 75 feet from the road, near Illinois Route 45/52.

One man was thrown from the car. Two other men were found inside the vehicle, police said. All three were pronounced dead at the scene.

The lone survivor crawled out of the mangled Nissan on his own and was found by a Kankakee County sheriff's deputy who drove by when he spotted the wreckage.

Gessner called it "one horrible accident." He says there was alcohol in the vehicle and toxicology tests on the victims are pending.

"Lukas is not one to drink and drive," said Katlynne Long, a cousin of one of the victims. "He would never drink and drive. I don't think he would be that person who would do that. Maybe the other passengers in the car could have been possibly having a drink, or something, but I don't see Lukas being the person to do that."
Related topics:
kankakee countytraffic fatalities
Copyright © 2021 WLS-TV. All Rights Reserved.
TOP STORIES
2 officers hurt, 21 arrested in Loop amid rash of violence: police
Man says he helped parents of accused Michigan school shooter
Iman Shumpert talks about winning 'Dancing With the Stars': EXCLUSIVE
27 shot, 6 fatally, in Chicago weekend violence: CPD
Peoria County corrections officer dies from COVID-19
Fire breaks out at Hammond law office of murdered attorney
Community Christmas tree burned in Washington Park
Show More
Biden administration to announce Beijing Olympics diplomatic boycott
Omicron updates: New US travel rules go into effect Monday
Chicago Weather: Windy, chilly Monday
Delivery driver among 2 shot in Back of the Yards, police say
Missing endangered man, 64, last seen in Palos Heights: police
More TOP STORIES News