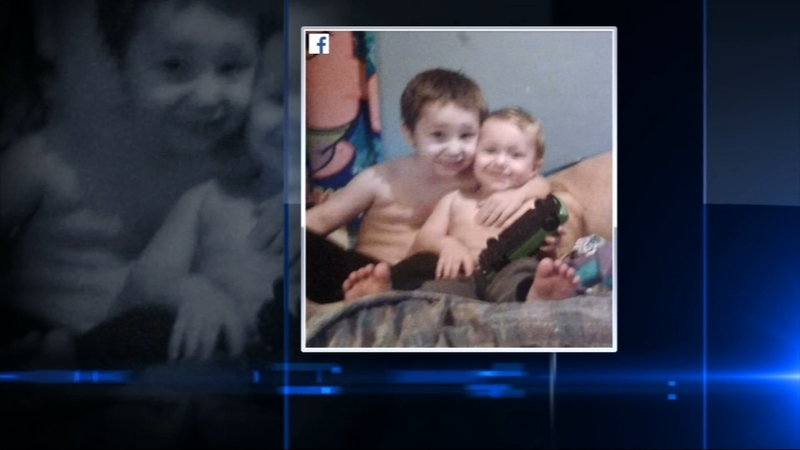 2 boys die after being pulled from Kankakee River; dad held on neglect charges

LAKE VILLAGE, Ind. (WLS) -- The father of two young boys may have been under the influence of narcotics when his sons drowned in the Kankakee River, according to the Lake County Indiana Sheriff Oscar Martinez Jr.

The grandfather of 2-year-old Evan Patillo, of Thayer, Ind., and 4-year-old Levi Patillo, of DeMotte, Ind., shared a photo of his grandsons with ABC7 Eyewitness News Wednesday morning.

Eric Patillo, 34, of Thayer, is being held on two probable cause charges of neglect of a dependent resulting in death, Martinez said. Those charges still need to be filed with the Lake County Prosecutor's Office. If convicted he could face 20 to 40 years behind bars.

Around 5:15 p.m. Tuesday, the Indiana Department of Natural Resources was notified by fishermen along the river near Schnider, Ind., that the father of two children appeared to be overdosing on drugs and that the children were playing in the water at the LaSalle Fish and Wildlife Area near the Newton County and Lake County line, Martinez said at a press conference Wednesday.

"I could definitely tell that they didn't need to have his children with him at that point and time," said Anthony Kyle, witness.

Kyle said about 15 minutes later they saw Patillo cooling off in the water, but the little boys were out of sight.

"My buddy said that he hadn't hear the kids in a while. You know, let's go check it out," Kyle said.

When they rushed over, they found the brothers under water.

"When he came over he seen hands and knees floating in the water about 10 feet behind me. That's when he proceeded to jump in the water to retrieve the first kid," said Dylan Sherwood, witness.

The fishermen rushed in to pull both of the children out. They called 911 and started CPR. Witnesses said Patillo tried to get into the water, but just seemed to be jumping up and down, splashing himself.

Police said Patillo was tested to determine if he was under the influence of alcohol or narcotics at the time.

Lake County Sheriff's deputies are also looking for 31-year-old Jesse Brandon Lintner. They said he is a friend of Patillo's and was at the river with him but took off before police arrived. He is being considered a witness and deputies want him to come in to be interviewed.

The father of two young boys may have been under the influence of narcotics when his sons drowned in the Kankakee River, according to the Lake County Indiana Sheriff Oscar Martinez