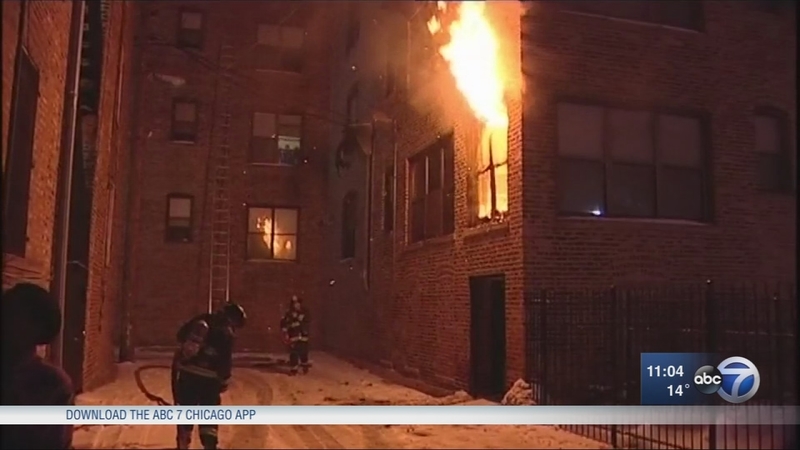 CHICAGO (WLS) -- An apartment fire on Chicago's South Side sent four people to the hospital early Tuesday morning. If it wasn't for two Good Samaritans, the outcome could have been much worse.

Huge flames shot out of the three-story courtyard building near East 45th Street and South Drexel Boulevard in the city's Kenwood neighborhood. But two brave neighbors didn't hesitate. Stanley Jones and Garnett Pedro heard children screaming for help and rushed inside to get them out.

"We were just doing what any person would have probably did," Jones said.

"When you see kids in danger, it's not about 'hero' with me. This is about helping," Pedro said.

They carried a mother and her six young children to safety.

"I put the two youngest on my arm and I took them in my apartment there. Then as I was taking them two, he came with the door and laid the door down so the others could walk through. Then I grabbed another one because they didn't have no shoes, no clothes, no nothing," Pedro said.

No one in the family was hurt. One of their rescuers suffered burns to his chest. He was treated by paramedics.

Investigators said the fire started in one of the children's bedrooms around 1 a.m. Firefighters said they extinguished the blaze quickly, but snow, ice and a blocked wrought iron fence made the job a challenge.

Three units were severely damaged by the flames. Fifteen people were displaced.

"Other people were brought out of the building from the upper floors. We evacuated and got everybody. Everybody was accounted for," said 1st District Chief Brian Helmold, Chicago Fire Department.

Three children and one adult were hospitalized for breathing in too much smoke.

A pregnant woman who lives directly above the apartment where the fire started told ABC7 Eyewitness News she wanted to remain anonymous.

"Everybody just screaming, 'Ma, ma, ma,' and I asked them, 'What's going on? What's happening?' But the smoke is hitting me in my face and now my eyes are burning, so I closed the door. I immediately get on the phone with 911 and I tell them we're trapped in the house. I don't know which entrance to go out of or anything - there's a fire under us," she said.

As the blaze raged below, she grabbed her three children and escaped down some stairs through the heavy smoke. She tripped on frightened neighbors and fell on her stomach. After she went to the hospital to get checked out, she came back to see what was left of her apartment.

She also said she never heard any smoke detectors go off during the fire.