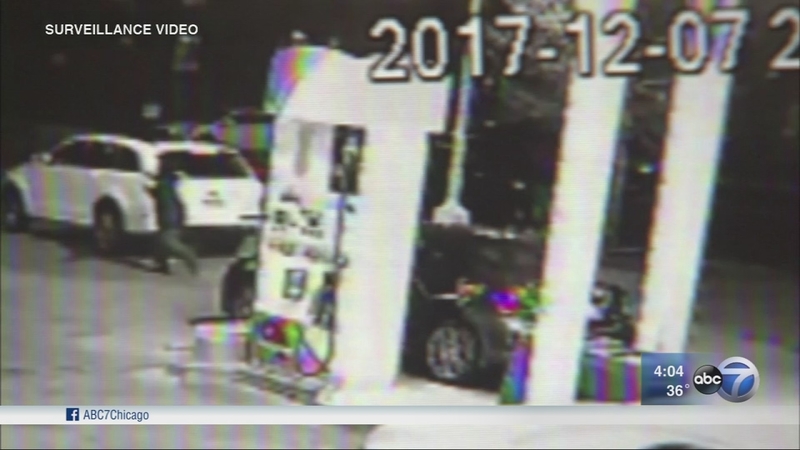 CHICAGO (WLS) -- Four thefts have been reported at or near the same South Side gas station in 34 hours. Many drivers don't lock their doors as they're pumping gas, and that's what these thieves are counting on. They're opening doors and snatching purses and wallets with the latest incident happening Thursday evening.

Surveillance video from the BP gas station at 47th and Woodlawn in the Kenwood neighborhood around 8 p.m. Thursday showed the latest incident, where an SUV pulled up next to a woman's car. It happened in just seconds, a white SUV pulled alongside a woman who's pumping gas, a thief hops out, opens an unlocked door, and snatches a purse.

She tried to chase after the SUV and was thrown to the ground as the thieves got away.

The 49-year-old victim reported that she went into gas station and while returning to her car, she observed a white car pull alongside hers, and an 18- to 21-year-old man opened her passenger side door, grab her purse, jump back into the white car and flee westbound on 47th St.

Earlier in the day, a 71-year-old woman reported she entered the gas station, and while she was inside around 10:30 a.m., her purse was stolen from her unlocked vehicle.

On Wednesday at 1:20 p.m. a 40-year-old woman, Angela Jackson-Soldier, reported that a male thief took her wallet from the front seat of a vehicle then fled from the same BP gas station at 47th and Woodlawn.

"It makes me feel like I can't go out even middle of the day and just do something as run-of-the-mill as pump gas," said theft victim Angela Jackson-Soldier.

She, too, was filling up with her 10-year-old son in the backseat. That incident was caught on surveillance video.

Jackson-Soldier was one of at least four victims Wednesday and Thursday, all at that same gas station where police have now beefed up patrols.

"We're still looking at it, so I don't want to say it's a pattern yet. But more than likely, it probably will turn out to be," said Chicago Police Superintendent Eddie Johnson.

Police say they're not aware of other gas stations being targeted and say the thieves responsible are likely part of a larger juvenile crime pattern that's been plaguing the city with carjackings and other crimes.

In the first incident, a 33-year-old man reported that Wednesday at 10:05 a.m. that while pumping gas, a black male approached and distracted him while another black male opened his car door and stole the keys to his car and a bag containing miscellaneous items. The thieves then fled the scene.

On Friday drivers were warned to lock up before filling up.

"Especially since it's cold, so you're not even thinking about locking your doors. So I guess now you have to be cautious," said driver Ingrid Cheatham.