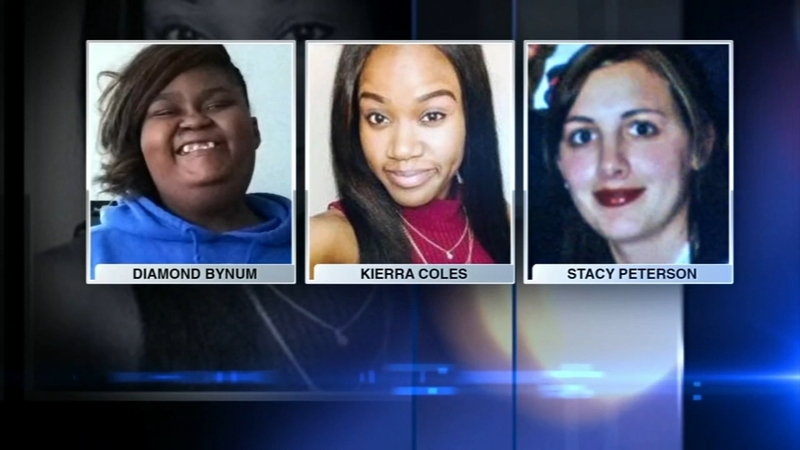 CHICAGO (WLS) -- The families of three Chicago-area women who went missing under different circumstances recently gathered together to call attention to their stories.

The father of Kierra Coles, a postal worker who disappeared last October, urged for anyone with information on missing person cases in the area to come forward.

Coles was last seen on surveillance video leaving her home near 81st and Vernon in the Chatham neighborhood. She was pregnant at the time and due in April.

Joseph Coles said police don't have any other leads in the search for his daughter, but he refuses to give up.

"I do believe my daughter is still alive," Joseph Coles said at Daley Plaza on Monday.

Kierra Coles' father, Joseph, said at a news conference Monday that he believes his daughter is still alive after she went missing nine months ago.

LaShann Walker will not give up either. Her intellectually disabled daughter Diamond Bynum went missing from her home in Gary, Indiana, along with her 2-year-old nephew King Walker, nearly four years ago.

At the time, it was believed Bynum had wandered off and gotten lost.

"My world has just been turned upside down," said LaShann Walker . "Sometimes I feel like I'm in this by myself."

The sister-in-law of Stacy Peterson, a Bolingbrook mother who disappeared nearly 12 years ago, also spoke out on Monday.

Peterson was 23 when she went missing in 2007. Her husband, former Bolingbrook Police Sgt. Drew Peterson, was a suspect, but he was never charged. He's serving time for killing his previous wife, Kathleen Savio, and a murder-for-hire plot to kill Will County State's Attorney James Glasgow.

Her sister-in-law, Norma Peterson, has since become a domestic abuse advocate. She's helping to promote what is known as an Evidentiary Abuse Affidavit, created in the wake of Peterson's disappearance.