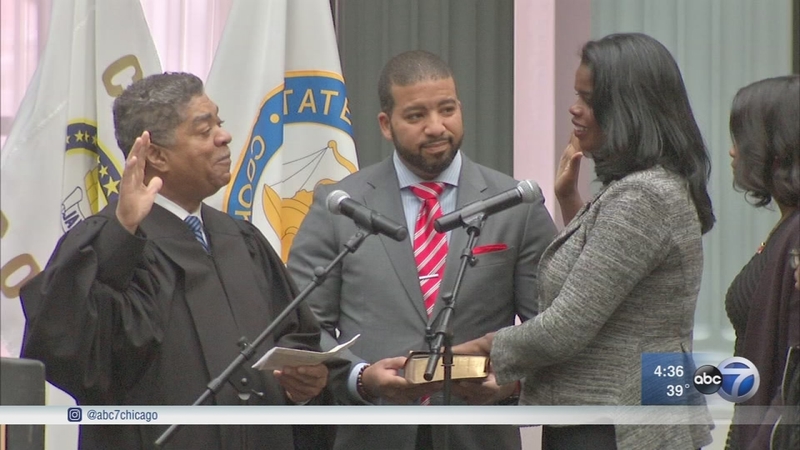 CHICAGO (WLS) -- A new era began Thursday in the Cook County State's Attorney's Office as Kim Foxx was sworn in as the replacement for Anita Alvarez.

Foxx became the first African American State's Attorney in Cook County, a long way from her childhood in Cabrini Green.

"I've seen some of the worst that our city has to offer but I know the beauty of its potential because it lets a girl from Cabrini stand before you in Harold Washington Library," Foxx said.

Foxx is taking over an office with a $149 million budget and over 1,000 employees. The 44-year-old won on the heels of public outrage over Alvarez's handling of the Laquan McDonald case. Promising reform, she said in her administration there will be a dramatic change in the transparency with which the office operates compared to how it has operated in the past.

"We will be working collectively with others to see how we can share our data, charging data, plea bargains and the like to address the racial disparities that people in the community are concerned about," she said.

Foxx hopes to drive down violence by connecting her office with the community. Some in the legal community worry she will act more like a public defender than a prosecutor.

"The State's Attorney's job is fighting for justice," Foxx said.

Foxx said that means being an advocate and holding people accountable at the same time, police included.

"We are going to do a wholesale review of how those cases are processed to make sure we are acting in accordance of justice and transparency for the public," she said.

Foxx said it will take time to mend relations between the police and the community.