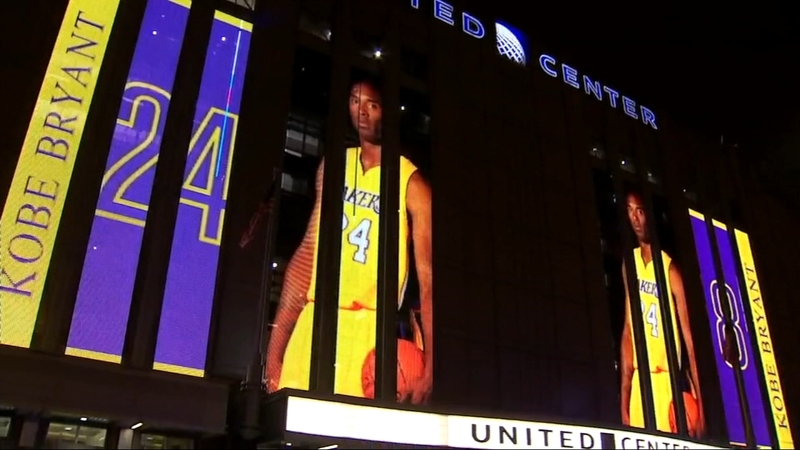 CHICAGO (WLS) -- The helicopter involved in the crash that killed Kobe Bryant, one of the NBA's all-time greatest players, once belonged to the State of Illinois.

The helicopter involved in the crash that killed Kobe Bryant, one of the NBA's all-time greatest players, once belonged to the State of Illinois.

Forty-one-year-old Bryant, his 13-year-old daughter Gianna and seven others were killed when his helicopter crashed in southern California Sunday, on the way to her basketball game. Witnesses reported seeing the helicopter flying way too low in the very foggy conditions.

The helicopter was previously owned by the state of Illinois. The state sold the helicopter, Chopper N72EX, to its current owner in 2015, according to an aviation safety website. The holding company is called Island Express Holding Corp.
CHICAGO FANS MOURN LOSS OF KOBE BRYANT

People mounring the death of NBA legend Kobe Bryant wrote messages in chalk outside the United Center in Chicago.

At the Chicago Bulls game against the San Antonio Spurs at the United Center Monday night, fans, players and coaches observed 24 seconds of silence in tribute to Bryant.

"He was part of my childhood, and just thinking that he's gone, it's a huge blow," said fan John Valle.

The House that Jordan Built, for the night at least, was transformed into a shrine to Bryant.

Los Angeles native Anshum Sood said he needed to be there.

"I got tickets actually a couple hours ago. I had to come out to the game," he said. "Seeing him. He's like my idol growing up and everything. That Mamba mentality always sticks with you."

The United Center honored number 24 with Lakers colors lighting up the building along with several pictures of the Lakers great. The Navy Pier Ferris Wheel was also lit up in purpl

"For me, the special parts will be the very few times I was able to spend time with him off the court and have discussions with him just one-on-one," he said.

The United Center honored number 24 with Lakers colors lighting up the building along with several pictures of the Lakers great. The Navy Pier Ferris Wheel was also lit up in purple and gold.

"He was my idol, since I was a little kid," said Luis Giles, fan.

"I grew up watching basketball. I'm barely 21. I guess this was my Michael Jordan," said Diana Aguilar, fan.

Kobe Bryant meant different things to different people. A temporary memorial was set up outside the United Center.

Chicago fans gathered around the United Center Monday to leave chalk tributes to and mourn the death of Kobe Bryant.

Tribute upon tribute lines the sidewalk just outside the center's main entrance as fans try to come to grips with the loss of a man they saw as larger than life, but who, in the end, proved to be just as mortal as the rest of us.

"Kobe was just a huge inspiration growing up," said Marissa Buckle, fan. "My bedroom was Lakers. Everything. And it's crazy that the death of someone I didn't even know affected me so hugely."

"I'm still in shock, said Tim White, fan. "I had to come down and take a look at all of this. It's just a remind her life is just so short."

"It's devastating, totally devastating," said fan Chris Courtney. "I had a friend of mine tell me and I couldn't believe it. I had to come up her and see for myself."

The United Center paid tribute to Kobe Bryant as Bulls fans make it a point to stop by and pay their respects after the NBA legend's death.

The house that Michael Jordan built became a spot for people trying to make sense out of this loss for those who grew up following Bryant's basketball career for decades.

"Taking it hard. It's like family," said fan Umar Shaheed. "He meant a lot with his words and his family and his encouragement and everything."

Bryant was an inspiration to many for his talents on and off the basketball court, with local fans calling him an icon who was bigger than basketball.

"I stopped to give my respect in regards to a great young individual who over the years has proven himself to be a great man," fan Willie Conrad said.

"I had to stop by to just show my respects to the family and how Chicago's doing a beautiful job recognizing this legend," said fan Tracy Young.

Nine people were killed including Kobe Bryant and his 13-year-old daughter when a helicopter crashed into rough terrain in California Sunday morning.

His Chicago-based promotional company produced the commemorative book for Bryant's final NBA game in 2016. More than 20,000 copies were handed out to fans at the Staple Center.

"We are very proud of it," Zirlin said. "This was one of the biggest print jobs that we've ever done and the quality is just beautiful."

Fans say his passing is a reminder that tomorrow isn't promised.
The fathers of Kobe Bryant and Northwestern head basketball coach Chris Collins were teammates on the Philadelphia 76ers. Collins was brought to tears talking about his connection to Kobe.

"I have a lot of history with Kobe going back to when he was a little kid and I have a daughter who is 13, so obviously, everybody in our program, our thoughts and prayers are with him and his family and his wife."

Basketball legend Kobe Bryant died Sunday in a helicopter crash that also killed his daughter and seven other. He was 41 years old.

In a statement, former Chicago Bulls star Michael Jordan wrote: "Words can't describe the pain I'm feeling... I loved Kobe..... he was like a little brother to me."