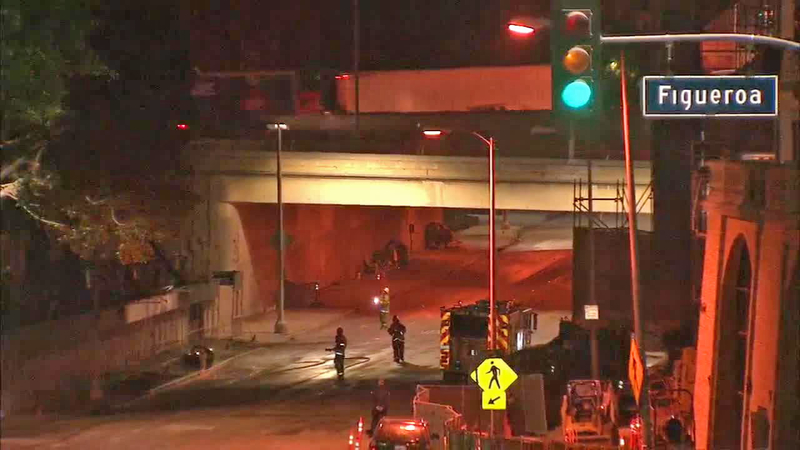 LOS ANGELES -- All lanes of the northbound 110 Freeway reopened in downtown Los Angeles Tuesday morning as crews continued to clean up the massive fire that broke out at a seven-story apartment complex under construction.

The fire erupted around 1:20 a.m. Monday at the Da Vinci complex on the 900 block of West Temple Street, damaging at least two adjacent city-owned buildings and shutting down the busy 110 and 101 freeways.

Most of the Da Vinci apartment building was destroyed by the fire. Firefighters were still dousing hot spots at the scene early Tuesday morning.

The bulk of the fire was knocked down after about 90 minutes, but it took several hours to control the fire. At its peak, 250 firefighters were on scene.

Flames spread across the 110 Freeway, damaging highway signs and melting the asphalt. Scaffolding from the construction site fell onto the freeway.


There were no reports of injuries. The cause of the fire remains under investigation. Arson investigators from the Los Angeles Fire Department and the Bureau of Alcohol, Tobacco, Firearms and Explosives were to begin inspecting the site on Wednesday.

As crews were fighting the fire in downtown, another blaze erupted about eight blocks away at a commercial building in Westlake District.

Officials say there's no information at this time to indicate that the two fires are related, but they say it is "ironic."

"Within hours of this fire, we had another fire, so our arson investigators are on the alert. They're taking that into consideration," said LAPD Capt. Jaime Moore.

The 1.3-million-square-foot Da Vinci apartment building had been under construction for several months. There was about $10 million in damage related to the apartment building alone, according to a preliminary estimate on Monday.