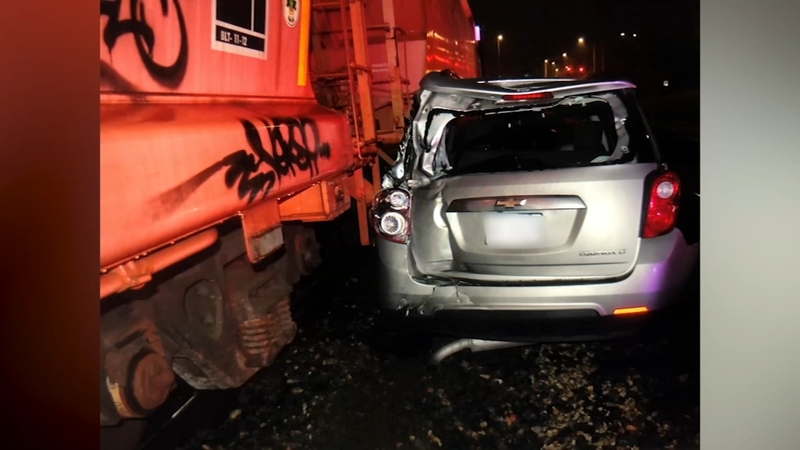 LA GRANGE, Ill. (WLS) -- Betsy Buckley teared up as she talked about the little girl she saved just seconds before a train slammed into a family's vehicle in La Grange Tuesday night.

"Her name is Faith," Buckley said on Thursday, talking about the girl she saved but had never met until that moment. "That's what really gets me."

Faith, 4, was stuck in her car seat after her grandmother accidentally drove their vehicle onto the train tracks at Shawmut Avenue.

Buckley said the grandmother, mother and her two young children - a 19-month-old boy and Faith - were in the SUV, which was stuck on the tracks. Buckley said the family had just gone to a doctor's appointment and apparently got lost.

"This was not their town. They were a little discombobulated. The GPS was telling them, 'Turn left. Turn left,'" she said.

But the grandmother turned too soon. She turned directly onto the railroad tracks. Buckley was driving home and saw the vehicle stuck on the tracks. She stopped to help.

"I just started running at them saying, 'How can I help? How can I help?' And, she looked at me and said, 'Thank you. Can you please help me? I can't get my granddaughter out.'"

Buckley said Faith's leg was caught in a seat belt.

"I just untangled the little girl's leg from the seat belt. I lifted her out," she said. "I just started running with her in front of me. I was like, 'Okay, let's go!'"

Within 90 seconds, the train slammed the SUV. Buckley and the family were a safe distance away, but Buckley said the mother was shaken up.

"The mom was very upset, hugging her son, and saying, 'Thank you, thank you,'" Buckley said.

La Grange Fire Chief Terrence Vavra said the department got the call at 5:17 p.m. on Tuesday.

When firefighters arrived, he said they searched and cleared the area, and they also talked to Buckley and the family. Vavra said Buckley stayed for another 90 minutes to help the family.

"We need to let her know how important that is to helping us help that family heal. So we'll recognize her soon," Chief Vavra said about Buckley. "She stayed for an hour and a half and helped that mother with two kids that she had no relation to, which is amazing."

Buckley said she used her car as a "warming station" for the family, and she colored pictures with Faith while first responders helped the girl's mother calm down.