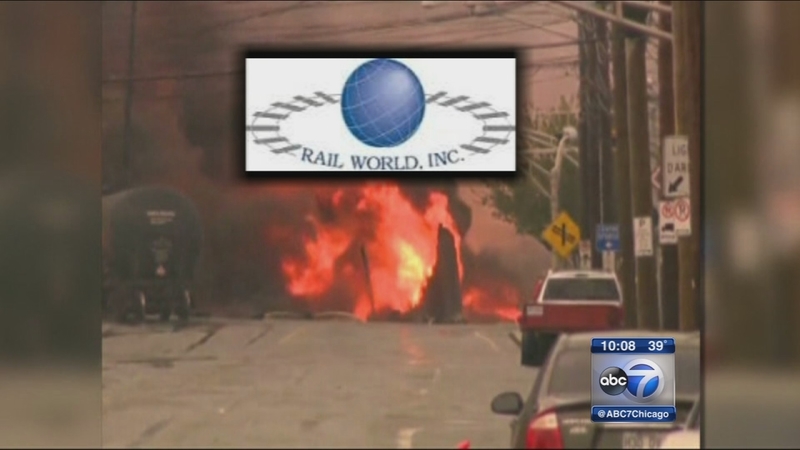 CHICAGO (WLS) -- The ABC7 I-Team has an update on "bomb trains": trains filled with crude oil that are a high speed risk on the rails. Now, there is word that millions of dollars will soon be paid to families of victims of the deadliest disaster two and a half years ago.

Nothing will replace the 47 people killed in Canada. But early next year, the loved ones of those who died in the Lac Megantic disaster will begin receiving their share of a $460 million dollar victims' fund. Some of the money was contributed by a Chicago company that owned and operated the railway where an oil train blew up that July day in 2013.

When dozens of runaway tank cars carrying U.S. crude oil derailed and split open, it wasn't just a small town Canadian village that was destroyed. The Montreal Main and Atlantic railway was well-forced into bankruptcy. That company - owned by Rail World of northwest suburban Rosemont - was among two dozen firms accused of responsibility in the tragedy.

Now, after months of negotiations, those companies are fully paid into a $460 million wrongful death fund for survivors and their families.

Right after the oil train explosion, the Chicago parent company owner Edward Burkhardt was roundly criticized for his handling of the incident.

"People say are you trying to duck out on this, I say, no I'm trying to be smart about how we allocate our resources. I feel personally absolutely rotten about it but what can you do at this point?" Burkhardt said in July 2013.

Court records obtained by the I-Team reveal Burkhardt was a less than enthusiastic participant in the settlement of the wrongful death claims and the victims' fund by demanding complete release from further liability claims and stating that Rail World officials were only willing to negotiate on the condition that any settlement would be final, the only way they would contribute to the victims fund.

When asked about Mr. Burkhardt's reluctance to participate in the victims' fund, the bankruptcy trustee told the I-Team that "no one pays a settlement gratuitously." Burkhardt and his attorneys didn't respond to our messages Tuesday night.

And this settlement isn't the end. There is a separate criminal case pending against several railroad workers who are charged with criminal negligence causing death, as well as many civil cases.