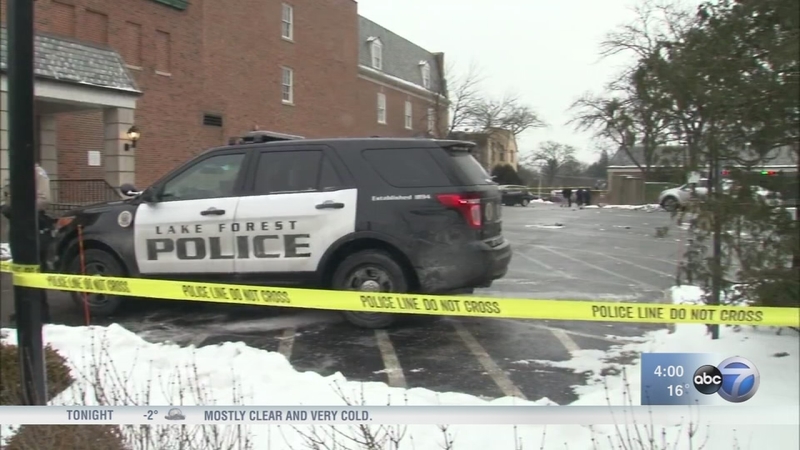 LAKE FOREST, Ill. (WLS) -- A man was found dead and a woman was fatally shot Wednesday morning in the downtown area of north suburban Lake Forest.

Officers responded around 6:20 a.m. to a report of gunfire in the 600-block of North Western Avenue.

When they arrived, they found a man's body and a 27-year-old woman who appeared to have been shot several times in a parking lot behind a Dunkin' Donuts, steps from the Metra stop at Western and East Deerpath Road.

The woman was transported to Lake Forest Hospital, where she died.

ABC7 Eyewitness News has learned the woman was a Naval Lieutenant who worked at the Lovell Federal Healthcare Center near Great Lakes in North Chicago. Her name has not yet been released.

The man has not been identified.

The Lake County Coroner is expected to release the identities of the victims as well as their autopsy results on Thursday.

The connection between the victims was not immediately clear.

The Lake County Major Crimes Task Force and Lake Forest police are investigating what led up to the shooting. They said the shooting may be related to a domestic dispute between the two.

Officers at the scene focused their attention on two vehicles in the parking lot. A car with out-of-state plates was towed from the lot, and investigators used a drone to assist.

Two cars in the parking lot appeared to have crashed into each other but it was not clear if that was related to the shooting.

"The scene has been secured and there is no risk or danger to the community," Lake Forest Deputy Police Chief Rob Copeland said.

In a message to parents, a spokeswoman for Lake Forest School District 67 said school officials were told that there was no danger to students and that schools would be operating normally.

Western will be closed all day Wednesday between Deerpath and East Illinois Road.