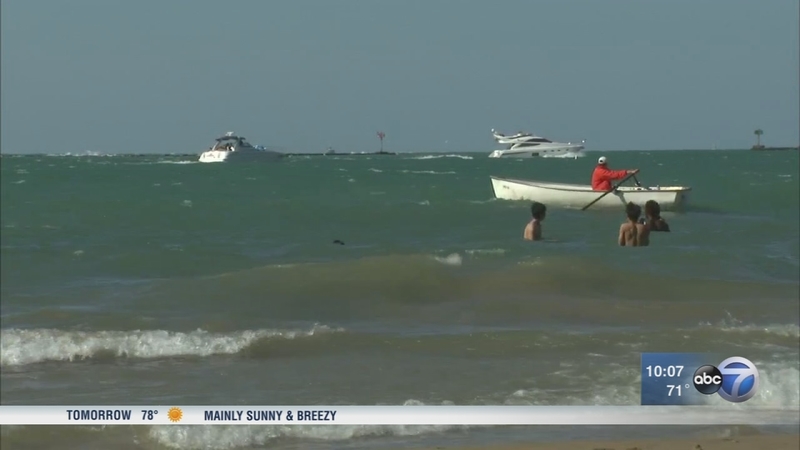 CHICAGO (WLS) -- Swimmers and beachgoers are being advised to stay out of Lake Michigan Friday and Saturday because rip currents are creating dangerous swimming conditions.

The National Weather Service has issued a Beach Hazard Statement, warning of high waves and dangerous rip currents for the next two days. The warning is now in effect and remains in effect until 7 p.m. Saturday as northerly winds of 10-25 mph are expected.

The warning affects beaches in Lake and Cook counties in Illinois, as well as northwest Indiana, southwest Michigan and southeast Wisconsin.

Swimming bans have been put in effect at several Chicago beaches, including North Avenue, Oak Street, Osterman, Fargo and MT Burroughs. Swim advisories have been posted at several others, including Ohio Street, Montrose, Rainbow, North Shore, Humboldt and Lane.

The "dangerous swimming conditions are expected to persist through Saturday evening," NWS warns and include waves reaching 7-10 feet along the beaches, strong rip currents, and structural currents.

"We are up against some pretty dynamic conditions for our open water swim," said Megan Melgaard, safety director for Swim Across America.

Competitive and amateur open water swimmers will head to Lake Michigan Saturday morning for Swim Across America, and they will have to bring muscle.

"It's kind of like a washing machine. Waves come and slap you in the face, and you just have to keep your head down," Melgaard said.

Boaters should also take caution. The waves can make for an unsafe, or at least unpleasant, ride.

"The waves make a big difference. The boat will handle it, it's just how much can you take?" said Michael Lawless, boat owner.

"Make sure you have all the equipment, slow down, make sure everyone is seated, not standing up, don't take chances," he said.

Thursday night, three teenagers were rescued in the lake near Ogden Dunes in Indiana. The current pulled them away from shore as they yelled for help. Good Samaritans heard them and pulled them out before first responders arrived. They are all expected to make full recoveries.

"You have to be smart," said Vicki Bourdaw. "You don't want to make a mistake and jump in and be towed away."