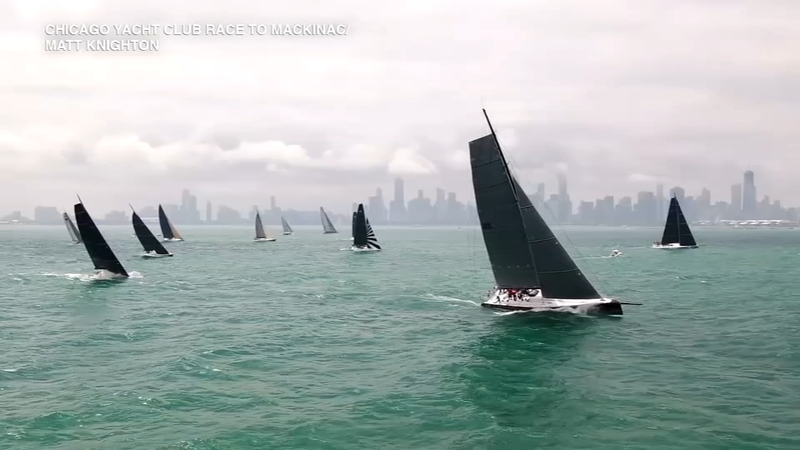 Sailor missing after falling from boat during Race to Mackinac

CHICAGO (WLS) -- A 53-year-old sailor participating in the Race to Mackinac was missing Saturday night after he fell overboard near Navy Pier just 40 minutes after the boat left shore.

Jon Santarelli, of Chicago's Lincoln Park neighborhood, is an experienced sailor and one of more than 2,500 participants in this year's race through Lake Michigan to Mackinac Island.

Rescue efforts were suspended before 10 p.m. after seven hours of searching.

After nearly 7 hours of active search efforts, it is with great regret that we can confirm the US Coast Guard has suspended search efforts for "Imedi" crew member, Jon Santarelli, who fell overboard after the start of #CYCRTM this afternoon.
READ MORE 👉 https://t.co/X6eDWv2RS9 pic.twitter.com/71T66Dd4YU

According to the Chicago Yacht Club, which organizes the annual 333-mile race, the Imedi and its crew of thirteen were in the last wave of sailboats to start.

While there were strong winds and high waves reported on Lake Michigan on Saturday, race officials do not believe bad weather led to the accident.

It was immediately unclear how Santarelli fell into the water.

Authorities were called at about 2:45 p.m. about the person overboard located roughly 4-5 miles northeast of Navy Pier in Chicago.

The Chicago Fire Department's marine unit, the U.S. Coast Guard and civilian boats searched the area. Several of the competing boats suspended their race to help with the search and rescue, officials said.