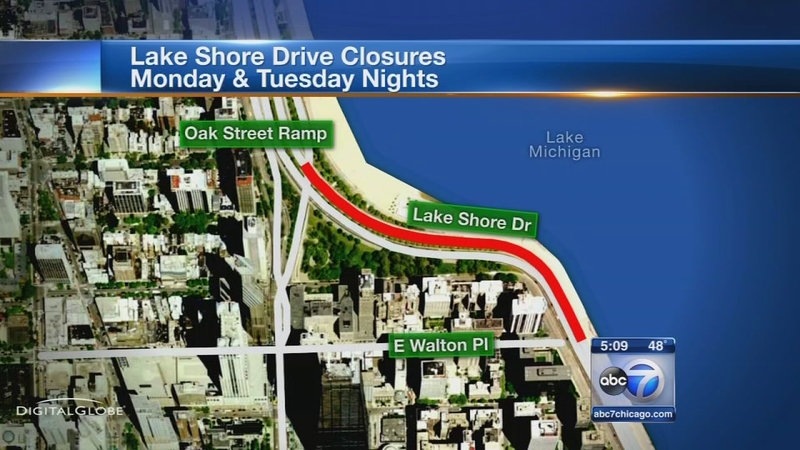 CHICAGO (WLS) -- A section of North Lake Shore Drive will be shut down Monday night through the week, creating detours for evening downtown drivers.

The lane closures are expected to make downtown traffic even more congested as other major construction projects, such as the Loop Link, are still underway.

Overnight closures along the Oak Street curve - between Walton and Michigan Avenue - on northbound LSD will begin at 8:15 p.m. until 5:45 a.m. Monday and Tuesday nights.

Cars will be detoured at Randolph to Michigan Avenue and then back onto northbound Lake Shore Drive at the Oak Street entrance ramp.

During the same hours on Wednesday and Thursday night, the work will switch to the southbound lanes. Drivers will be pushed off at Michigan Avenue and can get back on LSD using eastbound Randolph.

The ongoing $2.5 million repaving project aims to reduce potholes during the winter.

Construction on Lake Shore Drive have caused only lane reductions, but closing the entire road will be safe, especially after early Monday morning crash on LSD involving a sports-utility vehicle and a paving vehicle, city officials said.

Meanwhile, Loop Link construction is still underway along both Madison and Washington streets.

The multi-million dollar project aims to make bus travel faster and has redone red bus lanes near Daley Plaza and three other locations after it was determined the lanes were too narrow.

Work is also underway on a new $75-million Washington Wabash train station, which replaces two aging CTA stations at Madison and Randolph, forcing riders to get off a stop earlier or a stop later.

While most construction work is expected to be done by the end of 2015, that may not be soon enough for holiday merchants at the Christkindlmarket on Daley Plaze, which opens the Friday before Thanksgiving.