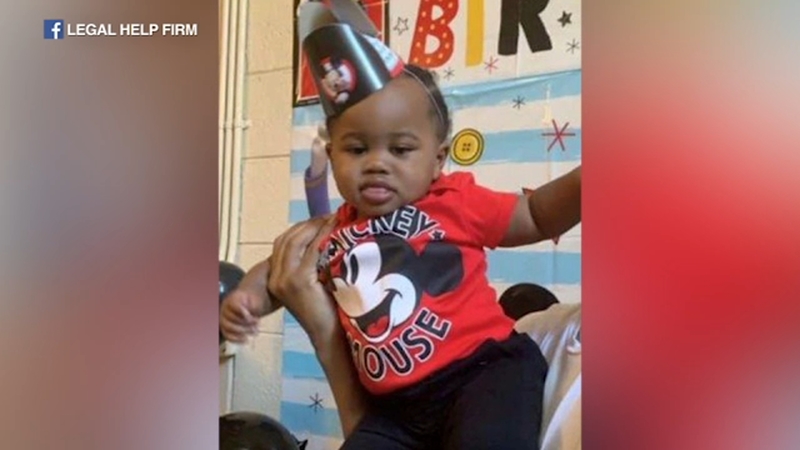 CHICAGO (WLS) -- The man charged in the shooting of 22-month-old Kayden Swann on Lake Shore Drive has been denied bail.

Deandre Binion, 25, was charged with three felony counts of first-degree attempted murder as well as one felony count of aggravated battery and discharge of a firearm, Chicago police said Thursday.

Police said Binion was the one who fired shots that injured Swann in a road rage shooting earlier this month. Swann continues to improve and is breathing on his own with support, doctors said Monday.

The arrest could not have been made without the help of Kayden's grandmother, who was in the car when the shooting took place April 6, according to police.

A 25-year-old man has been charged in the shooting of 22-month-old Kayden Swann on Lake Shore Drive.

"She did know the defendant. It wasn't just, like I said, road rage, so this was just a complete stranger to her, but she was extremely cooperative with us, and that led us to then, well now, we can start working on the investigation, and as we move forward and we kind of follow the car, and we start to look at possibly which license plates are involved and who could be in that car. The car was not registered to Binion. It was a lot of good detective work," said Brendan Deenihan, CPD chief of detectives. "She gave us a great description, so we were eventually able to put someone in a photo array and she does pick him out."

Jushawn Brown, who was driving the car Kayden and his grandmother were in, was arrested on gun charges following the shooting.

"When I pulled out to get away from him, that's when he started shooting. Shot about five times," Brown recalled after being released from Cook County Jail on bond.

Brown was adamant that he never fired his gun during the incident, and Chicago police back him up. They say only Binion fired shots.

"I think everybody involved, whether you're a parent or not, everybody, it's a different, you have a different feel, and a different sense of what you're trying to do, and you're working for this child," Deenihan said.

Kayden, who was shot a little over two weeks ago, has been transferred out of Lurie Children's Hospital's pediatric intensive care unit and "continues to be very responsive to treatment, is alert and active," according to a statement from Dr. Marcelo Malakooti, PICU medical director.

"He continues on a very positive trajectory, and I expect him to have a great road ahead," Malakooti said.

Kayden's health has gradually improved since he was hospitalized in critical condition after being shot in the head April 6 on Lake Shore Drive. Police have said the shooting stemmed from a road-rage dispute which turned violent.

Court documents released Friday said Brown yelled out to Binion as he attempted to aggressively merge at Roosevelt, "I have a child in the car!"

Afterwards, Binion dangled a gun and then fired it as he drove parallel to Brown's car, the documents said.

Binion then exited his car and stood up, firing shots on Lake Shore Drive, according to court documents. This was reportedly witnessed by an off-duty police officer.

Binion's lawyers said he is a CDL truck driver and has no criminal history.

He was denied bail in bond court Friday.