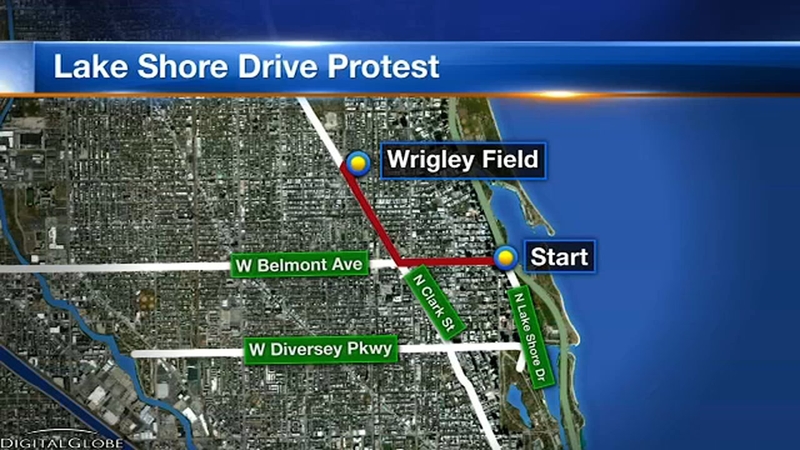 CHICAGO (WLS) -- Anti-violence protesters plan to shut down a portion of Lake Shore Drive and streets around Wrigley Field on Thursday, but they are not working with Chicago police or the mayor's office.

Participants expect to get arrested, organizers said. The protest will occur at the height of rush hour and just ahead of the 7 p.m. Cubs-Padres game at Wrigley.

At 4 p.m., the group plans to shut down the northbound lanes of Lake Shore Drive on Chicago's North Side before marching west on West Belmont Avenue, then north on Clark Street to the ballpark.

On Monday, organizers gathered in front of Mayor Rahm Emanuel's office, but they did not seek his approval. Emanuel did express support for an anti-violence march earlier this month that shut down parts of the Dan Ryan Expressway on the South Side.

In fact, Livingston is calling for the resignation of Emanuel and Chicago police Supt. Eddie Johnson because they have failed to reduce violence.

Organizers made several indirect references to Father Michael Pfleger, who led the anti-violence march on the Dan Ryan Expressway. Not only did Emanuel back that protest, but Pfleger worked closely with police on a safety plan.

"We are not looking for permission, because we feel we really have to make an impact on city hall," Livingston said.

Last week, Mayor Emanuel said he hopes Livingston and other organizers of the protest work with police to ensure public safety.

However, some activists who are against Thursday's protest said that calling for the mayor and superintendent to resign is not the way to have an impact on city hall.

"We need to sit down with all heads of government and say listen let's have a serious conversation about this and let's do something about this," said Harold Hall, who is against the Lake Shore Drive protest.

Organizers say they can't predict how many people plan to participate, but hope it will be enough to shut down the streets along the route.