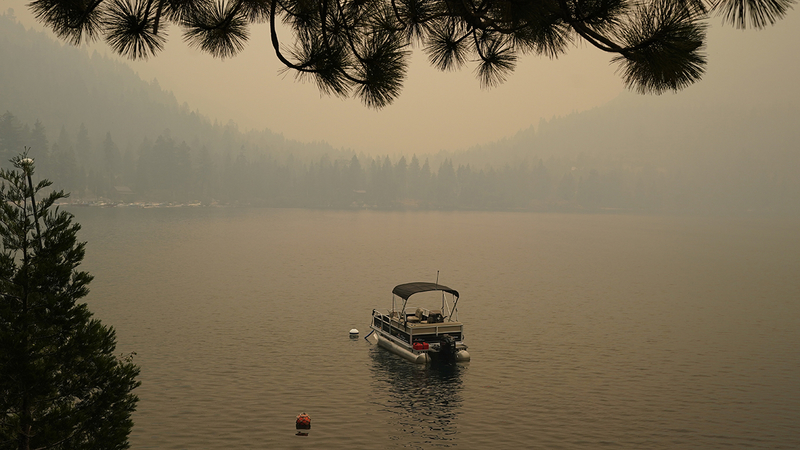 The Caldor Fire has proved so difficult to fight that fire managers this week pushed back the projected date for full containment from early next week to Sept. 8. But even that estimate was tenuous.

"I think that's going to be assessed on a day-by-day basis," said Keith Wade, a spokesman for the incident management team.

A Northern California police officer who had been on his way to help with the fire died Thursday of his injuries, officials said Friday.

Galt Police Officer Harminder Grewal was gravely injured in a head-on traffic collision that sent him and his partner to the hospital on Sunday.

"He made the ultimate sacrifice while ... responding to danger. Officer Grewal took pride in serving his community and his work ethic was contagious to all who worked with him," the department said in a statement.

Grewal, 27, was a 2 1/2-year veteran who was the department's "officer of the year" in 2020, Gov. Gavin Newsom said in a statement honoring him and ordering Capitol flags to half-staff.

Grewal was a member of the honor guard and had recently been selected to be a motorcycle officer, Newsom said. He said Grewal's partner is recovering from her serious injuries. The driver who crossed into their lane also died.

Burning since Aug. 14 in the Sierra Nevada, the Caldor Fire has scorched nearly 144,000 acres, or 225 square miles (583 square kilometers), and remained only 12% contained Friday.

Flames churned through mountains just southwest of the Tahoe Basin, home to thousands and a playground for millions of tourists who visit the alpine lake in warmer months, ski at the many resorts in winter, and gamble at its casinos year-round. The area is blanketed in smoke at a time when summer vacations should be in full swing.

The fire's eastern edge was about 7 or 8 miles (11 or 13 kilometers) from the city of South Lake Tahoe, said Robert Baird, a U.S. Forest Service director of fire and aviation management.

"That area has been a focus of intense resource and concern for all of us," he said.

Primary and secondary fire lines cut by bulldozers, hand crews and burnout operations were in place to try to catch the fire before it reaches South Lake Tahoe, he said.

Evacuation planning was being done as a precaution, but there were no evacuations there as of Friday afternoon, he said.

There was equal concern for communities along the western side of the fire.

"When you look at the Caldor Fire, obviously there's many reasons that it's the highest priority fire in the country and in California. It has community and infrastructure in pretty much every direction," said Anthony Scardina, the U.S. Forest Service deputy regional forester for the Pacific Southwest region.

"That's why that fire is so complex, because in every direction there are significant risks," he said, adding that "it's right in the back door of communities on the west side."

The Caldor Fire is one of nearly 90 large blazes in the U.S. Many are in the West, burning trees and brush desiccated by drought. Climate change has made the region warmer and drier in the past 30 years and will continue to make the weather more extreme and wildfires more destructive, according to scientists.

In California, 14 active, large fires are being fought by more than 15,200 firefighters. Fires have destroyed around 2,000 structures and forced thousands to evacuate in the state this year while blanketing large swaths of the West in unhealthy smoke.

The Caldor Fire has continued to grow, but not as explosively as its early days when it ravaged the community of Grizzly Flat. Ongoing tallies have counted 469 homes and 11 commercial properties destroyed, along with many smaller structures.

In the Lake Tahoe area, visitation began to drop when Highway 50, the major route to the south end, closed and again when a Dierks Bentley concert was canceled, according to Carol Chaplin, president and CEO of the Lake Tahoe Visitors Authority, which promotes tourism to the south side.

"Obviously, the air quality began having a significant negative impact at that same time," she wrote in an email to The Associated Press. "At our visitor center, many of our calls were around concern for future reservations, but as the fire has grown, lodging has experienced a significant drop."

Chaplin said she suspects occupancy is currently below 30%, and businesses are reducing hours and or days or temporarily closing.

"Our summer season was incredibly strong, and we were looking forward to continuing that trend through the holiday and into the fall," she said.