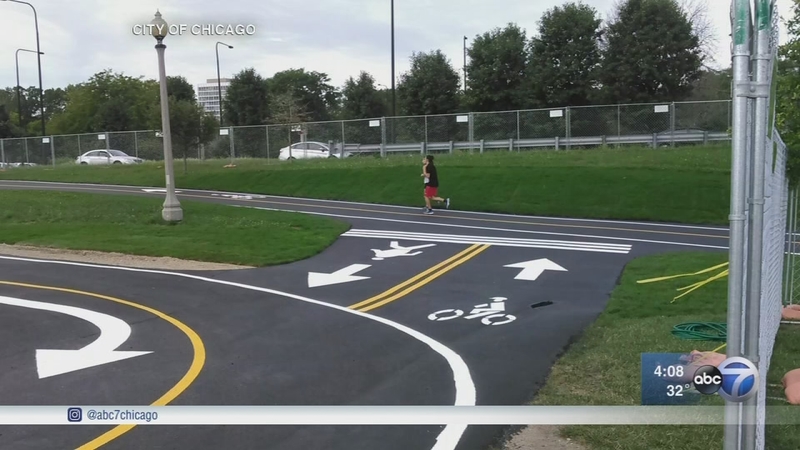 CHICAGO (WLS) -- A multi-million dollar donation to the Chicago Park District will help finish the Lakefront Trail separation project. The path will extend from Edgewater all the way to South Shore.

It's a dream come true for bikers and joggers along Chicago's lakefront. The Lakefront Trail is one of the most popular spots in the country for cyclists, runners and walkers.

"We have a national treasure and great attraction to the running and biking population, but the fact is we do have a problem," said Kevin Germyn of the Chicago Area Runners Association.

Megan Williams will never forget the day two years ago when a cyclist hit her on the path while she was running, causing a fractured skull and brain trauma.

"I was turning around. I looked left and right and before I knew it, everything went black," said Williams.

Hoping to avoid similar crashes in the future, Mayor Rahm Emanuel announced plans to separate the bike and pedestrian paths along the entire 18 miles of the Lakefront Trail.

"So bikers can enjoy the time. Runners and walkers can go enjoy their time and it doesn't become like rush hour on the lakefront," said Emanuel.

The new plan for the Lakefront Trail will split it into two separate paths- one for cyclists and the other for pedestrians.

Kenneth C. Griffin, the founder of Citadel and the state's wealthiest person, made a $12 million private donation to the Chicago Park District to fund the completion of the separate pedestrian and bike paths.

Mayor Emanuel previously announced plans to separate bikes from pedestrians along the trail from Fullerton Avenue to Ohio Street and from 31st to 51st Streets as part of his Building on Burnham initiative.

The trail will now cover the entire 18-mile pathway, with separate paths for cyclists and pedestrians.

The new bike trail will be 12 feet wide and paved in asphalt. It will be closest to Lake Shore Drive. The pedestrian trail will be 20 feet wide with asphalt in the center and three feet of soft surface mix on either side.

The entire project is expected to be completed by 2018.

Who is Ken Griffin?

But on Wednesday, billionaire Ken Griffin spoke at the event where Lakefront Trail separation was announced along with Mayor Emanuel.

Forbes Magazine ranked Ken Griffin, who is reportedly worth over $7 billion, as the wealthiest person in Illinois.

The avid runner and biker donated $12 million of his fortune to build separate cycling and pedestrian paths along the lakefront.

"The vision of separating the runners and bikers on the lakefront is a vision I'm 100 percent behind," said Griffin.

Mayor Emanuel said the lakefront was a topic during a lunch with Griffin whom the mayor, a runner and biker himself, described as a longtime political supporter.

"He has supported my efforts, not just for running for office, but my interest in what I want to invest in for the city," said Emanuel.

Griffin owns Citadel, the Chicago-based hedge fund. He has donated or raised tens of millions of dollars for Republican Governor Bruce Rauner, who, at least publicly, is one of Emanuel's political arch-enemies.

When asked about Griffin's assessment of Rauner as a "great leader," Emanuel brushed aside the political backstory.

"Ken and I don't agree about a lot of things on policy. But we do agree that public service is important. We also agree that Chicago is the crown jewel of the state of Illinois and what we're doing today is investing in that crown jewel so the people that live here can enjoy it," said Emanuel.