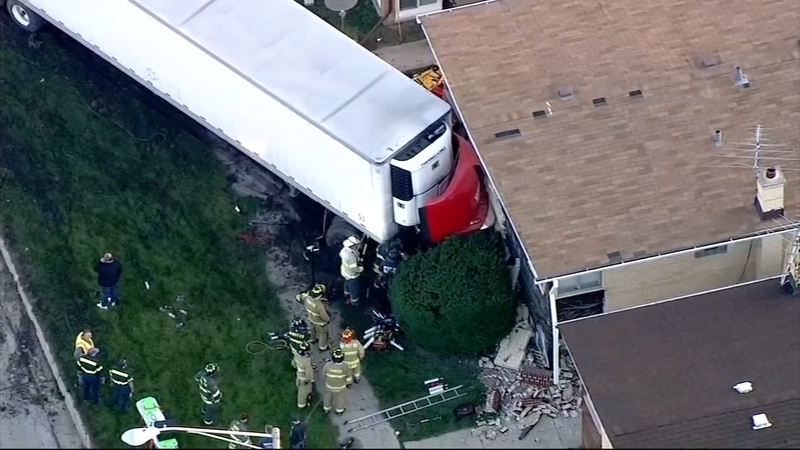 LANSING, Ill. (WLS) -- Two people were transported to hospitals after a semi-truck crashed into a residential building in south suburban Lansing Tuesday morning.

At about 7:58 a.m., crews were able to extricate the driver from the cab of the semi-truck, Lansing officials said. He was transported to University of Chicago Medical Center with non-life-threatening injuries.

The 36-year-old man from the basement apartment who inside the building was transported to Advocate Christ Hospital in critical condition, Lansing officials said.

Delores Tyler watched from her car as the semi-truck swerved and crashed, rushing over with other witnesses to keep the driver alert until help arrived.

"He told us his name, how old he was, how many kids he has and he told my daughter that he's sorry, he drifted off and he fell asleep," Tyler said.

Danielle Godfrey lives on the third floor. She was asleep along with her 2-year-old son and 13-year-old daughter. Their bedroom walls caved in.

"My whole building shook really bad," she said. "Stuff started falling off my dresser. My fan flew on my bed and hit me and when I woke up, I'm like, 'Oh my God.'"

The injured man from the basement apartment was covered in bricks.

The rental truck operated by Vanek Brothers Trucking Company based in Chicago was hauling thousands of pounds of meat, according to an employee who doesn't want to be identified.

Firefighters finally untangled the rig from the building with the driver's seat filled with glass and bricks.

Vanek Brothers Trucking has no comment at this time.

Meanwhile, residents say they have nowhere to go as the apartment building was deemed unsafe following the accident. The Red Cross is also assisting displaced residents.

"I don't know where we're gonna stay at this point, but really shaken up right now," said Dwayne Lonzo.

A spokesperson from the village of Lansing said they have not been able to interview the driver. They have also not looked at his work logs to determine how long he had been behind the wheel.