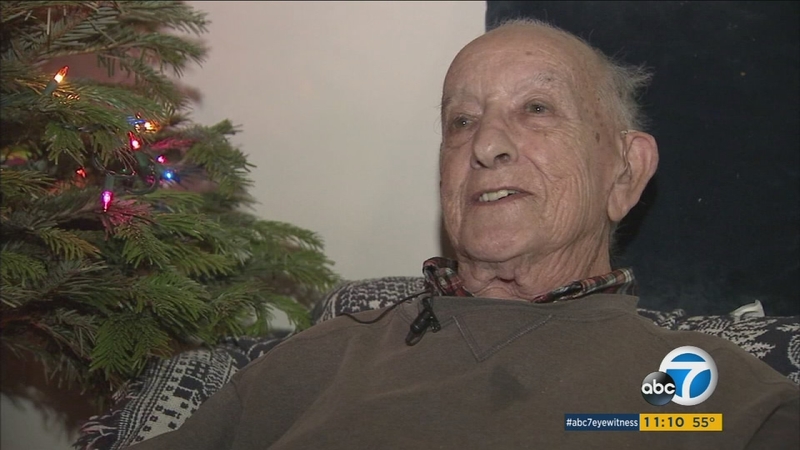 LOS ANGELES -- Officers with the Los Angeles Police Department are getting into the spirit of giving as they helped a 94-year-old World War II veteran get a Christmas tree.

Herman Perry was the center of attention on Monday, but not by his own choosing.

His apartment is being spruced up and it's looking more festive this year than in years past.

Officers Abel Torres and Natali Nunez were called to check on Perry's wellbeing after neighbors hadn't seen him for a week.

"Called out his name. At first we didn't hear anything so naturally you know you kind of assume the worst," Torres said.

"That sigh of relief of opening his bedroom door and seeing him wide awake watching TV was such a great feeling," Nunez said.

Perry's family lives in Massachusetts and knowing he was alone for the holidays, Nunez and Torres got into the giving spirit.

"We figured you know maybe he needed some cheering up or some Christmas spirit and just show him that we care," Torres said.

The officers went to a tree lot down the street after hours and the owner of the lot gave them a free tree and a set of lights.

"It's wonderful, I don't know why, I should be in the movies with all the attention I get," Perry said laughingly.

Perry also received presents to go under the tree including new clothes and crossword puzzles.

He also won't have to do much in the way of cleaning for some time thanks to his neighbors and the officers.

"Some of the freedoms with have today I owe to people like that, people that served our country. So it's just a small way to give back," Nunez said.