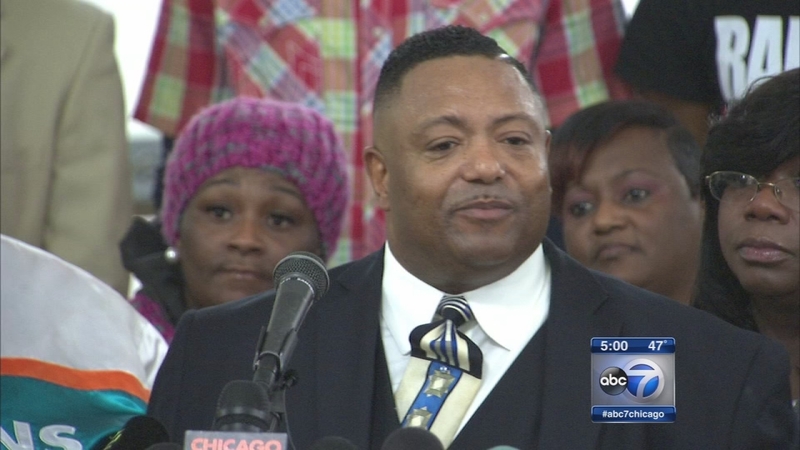 CHICAGO (WLS) -- Laquan McDonald's family addressed the public Friday for the first time since dashcam video of the teen's 2014 shooting death was released.

"I felt change in the air. We prayed and began to ask God to put some wisdom and clarity to the march to bring about a result that would help all families. Not just our family," Hunter said.

The family acknowledges the changes made to the Chicago Police Department and Independent Police Review Authority. With the former Police Supt. Garry McCarthy gone, the family didn't have harsh words for Mayor Rahm Emanuel; Cook County State's Attorney Anita Alvarez is their target.

"Anita Alvarez has forfeited the moral high ground and she's lost the trust of the people of the County of Cook and City of Chicago. The right thing for her is to resign," Hunter said.

Pastor Hunter, #LaquanMcDonald's uncle: "I hold @SAAnitaAlvarez accountable" she must resign because she "forfeited the moral high ground."

Hunter described the McDonald as a "gentle giant," "a big boy, but a teddy bear."

"Laquan was the kind of kid that when he saw you, he greeted with a hug, he tried to make you laugh. He was a jokester. That's who he was, he was the life of the party," Hunter said.

Yet the family says too often police officers and others sometimes have a different view of young African American men.

Pastor Hunter: #LaquanMcDonald had a family. "The love for him was real." @ABC7Chicago pic.twitter.com/l9UDtD1CDf

McDonald's mother was not present at Friday's news conference.

"She is hurting from the constant reminder of the senseless death of her son. She doesn't want to see it anymore," Hunter said. "This girl is truly traumatized. If she was here today, she wouldn't talk. All she would do is cry."

Reminded because his death - caught on camera - is now international news.

Hunter also called for a federal summit in Chicago's North Lawndale neighborhood on gun violence, urban poverty and police brutality. He said the community needs federal resources for "economic development, housing, healthcare and mental health" in order to make a change and stop the violence in their neighborhood.

The pastor says he also wanted to make sure people realized that McDonald had a family. Although he was a ward of the state, the family's attorney on Friday said that his mother was legally fighting to get custody of him when he was shot and killed.