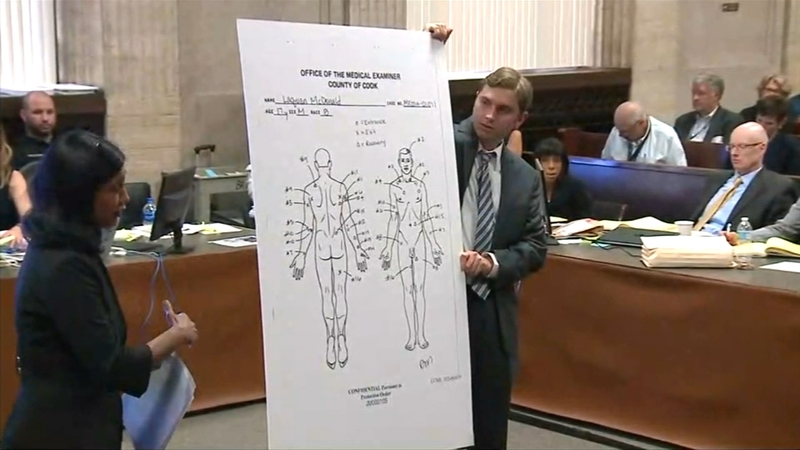 CHICAGO (WLS) -- Testimony continued for a third day Wednesday in the Jason Van Dyke murder trial, with the Cook County Medical Examiner taking the stand for the longest period of time.

Most of the evidence Wednesday was related to the injuries sustained by 17-year-old Laquan McDonald when he was shot 16 times by Van Dyke.

Cook County Medical Examiner Dr. Ponni Arunkumar testified about the autopsy report done by a former forensic pathologist. Her testimony was accompanied by graphic autopsy photos of the teenager and X-Rays.

A relative of Laquan McDonald wipes away tears as she sees the autopsy photos of the 17 year old. #vandyketrial

Arunkumar testified that McDonald was alive for all 16 shots fired by Van Dyke, and said all 16 shots caused blood loss, broken bones and brain trauma.

She also testified that toxicology reports showed he was intoxicated with PCP at the time of the shooting.

The Chief Medical Examiner says a low dose of PCP was found in Laquan McDonald. She says additional toxicology testing was requested by an Asst. State’s Attorney.#vandyketrial

McDonald's family sat through hours of graphic photos and difficult testimony, but his great uncle said it was worth it.

"I'm satisfied at the case that the prosecution is presenting. I think he and his team are doing a yeoman's job at bringing justice to the forefront," said Rev. Martin Hunter, great uncle of Laquan McDonald.

Rev. Jesse Jackson was in court, sitting with the family.

"I wanted to sit with the family. I've been sitting with them since the beginning of this ordeal," he said.

Van Dyke's wife Tiffany has also been in court, sitting with former president of the Fraternal Order of Police Dean Angelo. He said he thought the description of each injury may have lost the jury.

Before testimony began, there was some legal wrangling over a witness called Tuesday from the FBI. Before jurors were brought into the courtroom prosecutors asked the judge to reconsider his decision to strike testimony from FBI forensic video examiner Mark Messick.

Messick made a slowed down version of the police dashboard camera video showing the shooting of Laquan McDonald. He marked it with arrows pointing to where he believed the 16 bullets hit.
Judge Vincent Gaughan threw out his testimony, agreeing with the defense attorneys, who said that Messick is not a ballistics expert.

But prosecutors argued Wednesday that when the jury takes his testimony into account with a pathologist and a ballistics expert, it will prove how many times McDonald was stuck by the officer's bullets.

The judge allowed Messick's to testify again, but limited to the video enhancement so it could be re-entered into evidence.

The paramedic who treated Laquan McDonald after he was shot testified Wednesday at the trial of Chicago Police Officer Jason Van Dyke.

Wednesday, the state also called a CFD Firefighter/Paramedic Mark Smith, who treated Laquan McDonald after he was shot. He said McDonald had a pulse but he did not appear to be breathing and then they lost his pulse.
Prosecutor: "Once the CPR was begun, what happened next?"

Mark Smith: "There was no change in the patient's condition and we continued CPR. I was replaced by the firefighter and he continued chest compressions and I jumped in front of the ambulance to transport to the hospital."