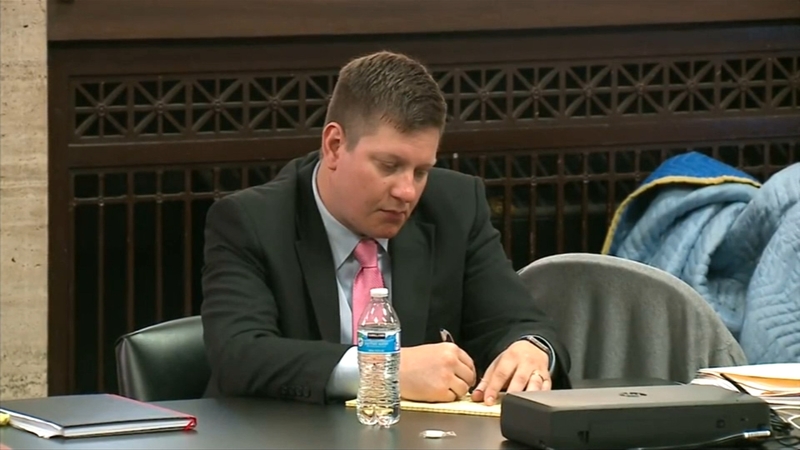 They are hoping to paint Laquan McDonald as a violent threat to the public and police officers on the night he was killed. They plan to show the 17-year-old was on a wild rampage through the city the night Officer Van Dyke shot him 16 times.

The defense called several witnesses, including a forensic pathologist and three correctional officers who had encounters with McDonald in juvenile detention.

Testimony wrapped up just after 2 p.m. Court will continue Tuesday at 9 a.m.

The first witness Van Dyke's team called to the stand was Dr. Shaku Teas, an expert in forensic pathology. She went over graphic photos of McDonald's autopsy in front of the jury. The photos show bullet wounds to the teen's body and head.

Teas testified that only one gunshot wound to McDonald's chest was fatal. She was critical of how the autopsy report was conducted, particularly the lack of documentation.

"If they are going to say that the hemorrhage from all these gunshot wounds caused his death, then I would say, 'Show me the documentation,'" she said.

Under cross examination she acknowledged she didn't do internal photos for all her autopsies, but argued this autopsy should have included more details.

"He put his arm back, so my partner hit him in the stomach but it really didn't affect him," said Joseph Plaud, a Cook County sheriff officer who encountered McDonald in juvenile court.

"We took him to the floor in the prone position due to his combative behavior," said Tyler Sage, a former Cook County sheriff officer.

Van Dyke's father and wife were both in court to watch the testimony. Seated with Tiffany Van Dyke was the family's priest and a nun who taught their children.

"We want to see peace come from all of this. This whole city needs to heal from this as well," Sister Maria Paulina Sterling said.

McDonald's mother was in the courthouse Monday and may be called at some point as a defense witness to testify about her son's troubled past.

Many wonder if Van Dyke will testify in his own defense. As of Monday morning his attorney Dan Herbert said he would not, but that could always change.

Defense attorneys will try to prove Van Dyke had no choice but to shoot a dangerous criminal and they will need to convince the jury that he feared for his life despite police dash camera video which appears to show McDonald walking away from officers.

They also intend to show that Van Dyke is a good cop and a family man who feared for his life and the safety of the public.

The defense is expected to take up much of the week, but it's possible the case could go to the jury by the end of this week or early next week.

Outside the courthouse there were some demonstrations Monday morning. Police kept a watchful eye and blocked the march directly in front of the courthouse steps. Protesters held signs and chanted, "Do what's just, do what's right. The jury must convict Van Dyke."

"We have seen the video over and over again," said Kofi Ademola, Black Lives Matter. "He was not a threat and could have been taken down non-lethally. Other officers suggested that a Taser be used, so there was no justifiable reason why Laquan McDonald should have been murdered."

Already, Chicago Fire Department personnel have been told to be on alert and bring their uniforms and equipment home in the event of violent reaction from protesters to that verdict.