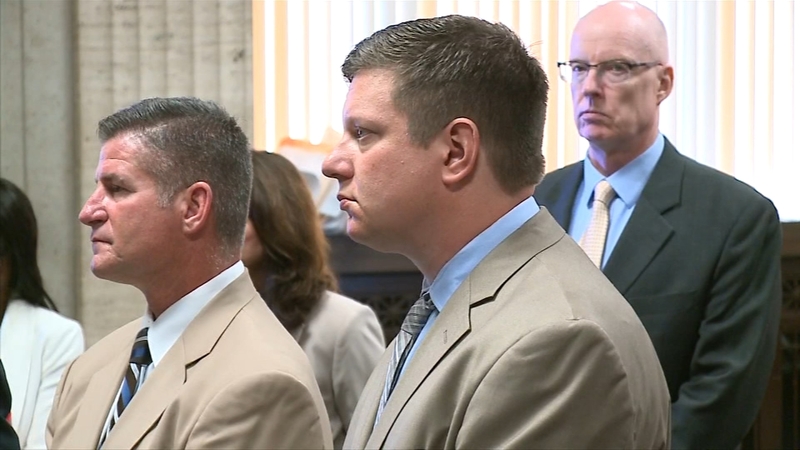 CHICAGO (WLS) -- Laquan McDonald's family asked the public for peace a day before jury selection is set to begin in the trial of Chicago Police Officer Jason Van Dyke, who is charged in the teen's 2014 murder.

The trial begins Wednesday morning when a pool of potential jurors will fill a courtroom at the Leighton Criminal Courthouse. They'll be asked to fill out questionnaires as the first step in seating the 12-person panel.

Former Cook County prosecutor Bob Milan is an ABC 7 legal analyst. "If you're the defense in this case, as far as what kind of jurors you want, you want law and order jurors. You want jurors that relate with the police, that sympathize with a police officer who has to make a split second decision," he said.

The day before Jason Van Dyke goes on trial for murder his wife spoke about her husband and her fears about the outcome of the trial.

The day before Jason Van Dyke goes on trial for murder his wife Tiffany Van Dyke speaks about her husband and her fears about the outcome of the trial as Laquan McDonald's family asked the public for peace.

"If you really sat down and got to know my husband, had a cup of coffee with him, just had a conversation with him, you would absolutely see there is not a racist bone in his body," Tiffany Van Dyke said during an interview on Tuesday's Windy City Live.

McDonald's family says the video and news of the trial are difficult.

"It's very hard because we constantly have to think about it, we lose sleep, we wonder how his life would have been if he wasn't killed," said Carlissa Hunter, McDonalds's great aunt.

Laquan McDonald's great uncle and family representative, Rev. Martin Hunter, asked the public for peace before, during and after the murder trial of Chicago Police Officer Jason Va

They say despite their loss they hope there is lasting change to improve the lives of Chicagoans.

McDonald's great uncle is looking forward to a new mayor after Rahm Emanuel announced he would not seek re-election Tuesday.

"This administration has for its entire tenure has tried to help the people from 30,000 feet in the air, and the hurt is on the ground," said Rev. Marvin Hunter, McDonald's great uncle and family representative.

Some observers are watching what happens inside the court and how Emanuel's wrapping up his term could affect the city.

William Calloway is one of the journalists who forced the video of the shooting of Laquan McDonald to become public.

"The ongoing tension between the law enforcement and the black community and with the trial of Jason Van Dyke tomorrow and what's to come after that, I think that's a lot of pressure on the city right now and that had a lot to do with it," community activist William Calloway said.

Rev. Hunter asked those seeking justice for the 17-year-old to remain peaceful before and during the trial, as well as after the verdict is read.

"People tend to be angry and anxious," Hunter said at a press conference at Grace Memorial Baptist Church. "The family wanted to officially say on record, that we are people of faith. We are urging all of the people of the city of Chicago and those that love this family and that are seeking justice for Laquan McDonald, that we are conscious that Laquan McDonald represents all the victims of police violence against citizens in this city and this county. However, we are asking for complete peace."

Hunter asked the public to honor the family's wishes in this way. He said he and McDonald's relatives have faith that the prosecutor and judge will bring about fair judgement in this case.

"I would like justice to be given in this case. We are not looking for revenge," Hunter said.

'No decision about jailing Chicago officer over interviews'

Over the weekend, Judge Vincent Gaughan declined to immediately decide whether Van Dyke should have his bail revoked or increased because he talked to the media.
Gaughan held a hearing Saturday and told both sides to return to court Thursday.

Van Dyke gave interviews just days before jury selection is set to begin Wednesday. Prosecutors accused Van Dyke of violating the judge's longstanding order prohibiting all parties from talking about the case outside of court.

Defense attorney Daniel Herbert says Van Dyke has free-speech rights. He says Van Dyke feels threatened and is "scared to death" that the public won't know his "personal feelings" about being charged with murder.

Van Dyke spent six nights in custody before being released on $1.5 million bond in November 2015.