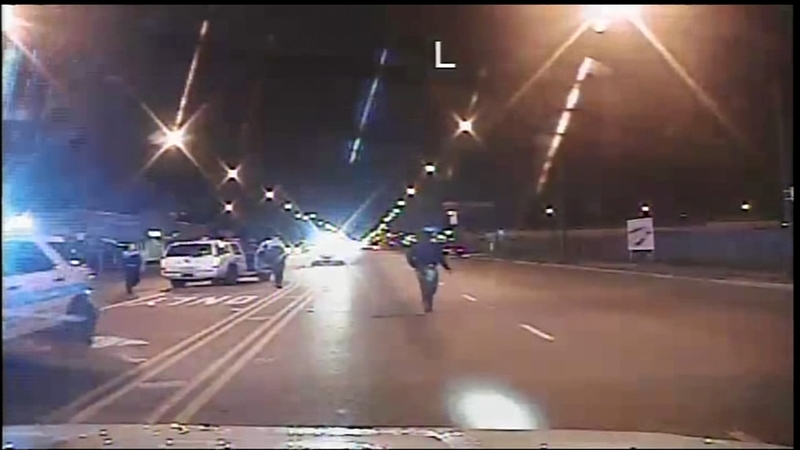 CHICAGO (WLS) -- The city of Chicago has released the inspector general's report in one of its most controversial and high profile police shootings: the fatal shooting of Laquan McDonald by Officer Jason Van Dyke.

The report, comprised of hundreds of pages, was released Wednesday after the City Council passed a law last month allowing their disclosure in certain police-involved cases.

The city inspector general did not look at police deadly force issues from the 2014 fatal of shooting McDonald on South Pulaski. What the IG did was an exhaustive investigation of whether police rules were violated and whether there were lies and a cover-up from Van Dyke, who fired the now infamous 16 shots, to his fellow officers on the street to supervisors who reviewed and approved official reports.

When Van Dyke emptied his 9mm gun on that night, ending the life of 17-year-old McDonald, it began a torrent of dishonesty, deceit, and misconduct by more than a dozen Chicago police officers and officials, according to the report by Chicago's inspector general.

"We've always maintained that there was a cover-up," said Reverend Martin Hunter, McDonald's great uncle. "We knew that from the moment Jason Van Dyke holstered his weapon the cover-up began."

The reports, on the actions of 16 officers connected to the case, show that not only did Van Dyke lie in his reports, but that supervisors all the way up to the Chief of Detectives signed off on what the inspector general called a false narrative meant to help Van Dyke.

Even after supervisors reviewed dash cam video that showed Officer Van Dyke firing 16 shots at McDonald as he was walking away from police, they still approved reports that painted a much different story.

"The fact of the matter is the night of the shooting this video clip was in evidence, everyone knew it, everyone saw it. Day after, and then a couple days after that it was reviewed by all the top command staff," said Dan Herbert, Jason Van Dyke's defense attorney.

The Inspector General's report concluded that Van Dyke made numerous false statements and material omissions, lies were told that served to exaggerate the threat McDonald posed to Van Dyke, and there were actions that constituted violations of CPD rules.

The Inspector General cited Deputy Chief David McNaughton for approving false statements in reports by Van Dyke, his partner and another officer.

Van Dyke was convicted of second degree murder in the McDonald case and is serving a nearly 7-year prison sentence.

The defense Van Dyke put on a year ago has its roots in an interview he first did with police accountability investigators in 2014. A transcript of the interview was also released Wednesday, during which the officer said of Laquan McDonald: "He's, he's comin' towards me."

And of McDonald's knife: "He's wavin' it in an, he's clenchin' it. Um with the blade forward underneath and he's wavin' it um from you know his right side towards his left in an upward fashion."

Finally, Van Dyke told investigators in 2014, "I think he's going to try and take my life away from me."

The inspector general concluded all of those statements - and several others - were lies, aimed at spinning a story that the fatal shooting was legit.

"Every one of them justified the shooting. There may have been some questions about the number of shots, but there was not a single issue raised with respect to the decision to shoot," Herbert said.

"...he (Roy) let stand reports that contained materially false statements and put forth a false narrative which served to exaggerate the threat McDonald posed at the time of the shooting," the report said.

The investigative reporter whose efforts led to the court-mandated release of the shooting video said this shows there was more than a police code of silence.

"It's kind of a machinery for producing in creating and sustaining and imposing and official narrative of what happened," said Jamie Kalven, of the Invisible Institute. "At no point is the police department really investigating what happened, let's try to figure out what happened here, their energy is going into how do we justify what happened."

The inspector general recommended that both Chief of Detectives Roy and Deputy Chief McNaughton be fired and placed on a do not rehire list. But both men retired before any action was taken against them.

The Fraternal Order of Police, Chicago's police union, fired back at the reports, saying "We do not believe that Inspector General Joe Ferguson is a credible authority of who is telling the truth and who isn't."

The FOP cited the three officers who were acquitted at trial of being involved in a cover-up, as a devastating blow to Ferguson's credibility.

Mayor Lori Lightfoot, a former prosecutor, backed the release of the inspector general's report. She had pushed the City Council to pass an ordinance allowing inspector general reports to be released by the law department in fatal police shootings.

"Today, we are taking another step in our efforts to bring greater transparency to city government and releasing the Inspector General reports related to the investigation of the killing of Laquan McDonald," Lightfoot said in a statement Wednesday. "This marks another important milestone in a new era of rebuilding the trust between our city government and the communities we serve."

Kalven said the mayor is to be commended.

"I think this is a significant show of transparency and the mayor said she was going to do this, she has now done it," Kalven said.

Now federal regulators are supposed to be working with CPD to make court mandated changes on how investigators handle police officers shootings.

"For the Chicago inspector general to say these people lied and they continue to lie should put a sense of urgency on those federal monitors," Rev. Hunter said.

The Chicago Police Department hasn't yet responded to ABC7's request for comment.

October 20th will be the five year anniversary of Laquan McDonald's murder.