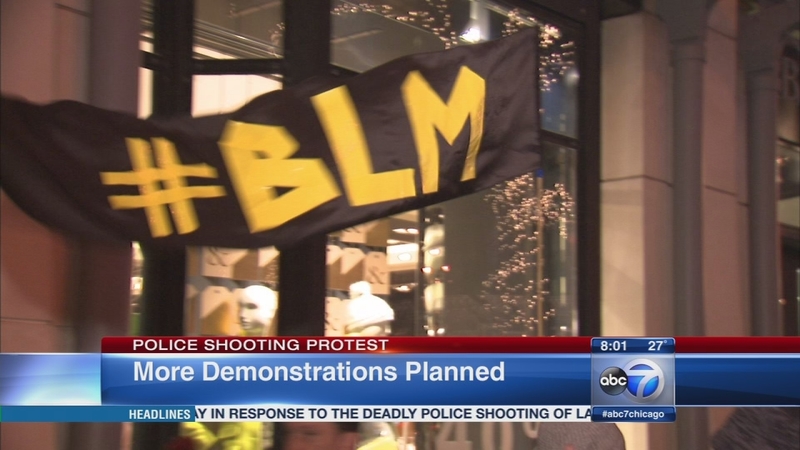 Protesters are unhappy with how the city has handled the shooting death of McDonald. A police officer has been charged with murder, but activists say that's not enough.

For the fifth day, activists used Michigan Avenue to stage the protest. The group held flags and used megaphones to chant "16 shots!" as they walked northbound past holiday shoppers. The protests were peaceful until around 7 p.m. when things took a turn. There was a scuffle, then an arrest.

At one point, protesters tried to get into the Tommy Bahama store, but were stopped by police. They carried on and things were peaceful until a fight broke out between police and protesters. One man was taken into custody.

Shortly after the arrest there was a strange twist to this protest. The leader began shaking hands with the cops who were lined up against the sidewalk to keep the demonstration contained to the sidewalk. He then challenged police to a friendly staring contest; where there was once tension, there were smiles and laughter.

Police said four people were arrested during Saturday's protest, all for misdemeanors.

Michigan Avenue businesses say they did feel the impact of Friday's protest over McDonald's death, as several stores were forced to close hours early on one of the busiest shopping days of the year.

It was back to business as usual along Chicago's Magnificent Mile Saturday as retailers saw some Black Friday shoppers return a day after a protest march shut down North Michigan Avenue most of the day.

"It was well worth it being able to come back down today and get everything that I needed for the holidays," said shopper Mike Baker.

On Friday, demonstrators blocked the entrances to dozens of high-end stores to keep customers out, sometimes using force. A few stores simply locked their doors.

Traditional retailers can generate up to 40 percent of their revenue for the year on Black Friday. North Michigan Avenue merchants haven't said how the protests hurt their bottom line. Bad weather and the popularity of online holiday shopping already had kept some shoppers away.

"I get it, but I feel like they could have done in a different way," Luis Kirkaldy said.