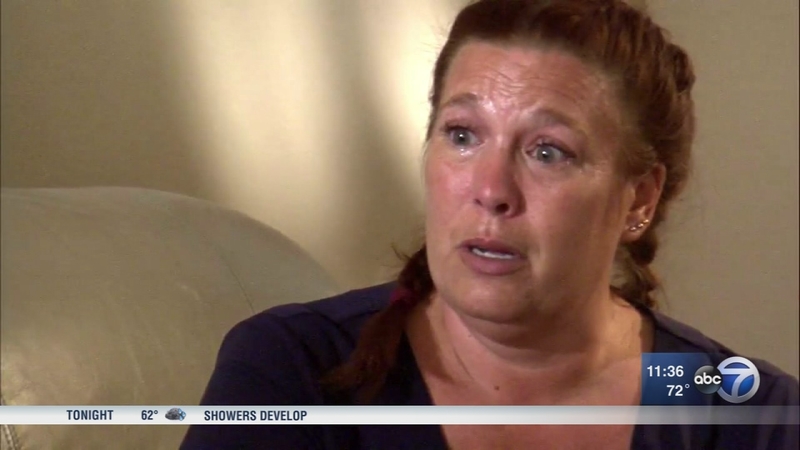 LAS VEGAS -- In the midst of Sunday night's chaos and carnage in Las Vegas, Heather Gooze didn't run. Instead she stayed, holding a stranger's hand as he died.

"I just didn't want him to be alone, ... to be a John Doe," Gooze said, choking up as she recounted the horror.

Heather had been working as a bartender at the festival. As the concert venue turned into a killing field, the bar became a triage center, she said.

"Three guys came, basically, running out of the back gate. They were holding ... a maintenance ladder, and there was a guy laying on it, and they said, 'Come over. We need hands. Get over here.'"

Gooze helped move the man to the sidewalk before the others ran back to ferry more people to safety, she recalled.

"I was kind of kneeling on the ground, ... and I had my hand over his hand, and I could kind of feel his fingers, like, wrapped around my hand," she said. "I felt, like, a squeeze on my fingers, and then I just felt the fingers go loose."

"In the movies you see them, their lips turn blue and pale, in hours," she said. "Within 10 minutes, we knew that he was gone."

Still, Gooze felt like she couldn't leave this man, she recalled. Soon, two people joined her.

"I sat there with him for an hour, and then we heard his cell phone ringing. And so, the gentleman that was sitting with me pulled it out of his pocket. I answered the call. It was a friend who had heard about what was going on," she said.

Gooze told the caller that his friend was no longer breathing. And while on the line, she learned his name: Jordan McIldoon. He was 25 and from Maple Ridge, British Columbia.

"I went on my phone. I went into Facebook, and I looked up his name, and he came up. I sent a message on Facebook to the girl that I thought was his girlfriend and to the only person in his Facebook that had the same last name as him," Gooze said.

Moments later, Jordan's phone rang again. It was his mother, who told Gooze that Jordan was her son and gave this stranger the number for his girlfriend, with whom he had gone to the concert, Gooze recalled.

Gooze called the woman, who was in lockdown at the nearby Tropicana hotel.

"She broke down, and she said, 'You know, he's the love of my life. This can't be happening.' 'You know,' I told her, 'I was here. I've been with him this whole time.' I go, 'I promise you, I will not leave him. I will not let them go anywhere with him or do anything or say anything that I'm not going to tell you about.'"

Gooze stayed with McIldoon's body for four hours, she said, until 3:30 in the morning. All the while, she kept in contact with Jordan's mother and his girlfriend.

"There was another guy that was by us," Gooze told CNN. "His wife had been shot and killed, the mother of his three kids. He never left her side. And I didn't want Jordan to not have somebody with him, so I stayed all the way until the detective came over, you know, saying that they were ready to move and to process."

Gooze shared the contact numbers she had, she said, then moved aside to let the authorities do their work.

With tears rolling down her face, Gooze said she didn't feel like she had done enough.

"The heroes are the paramedics and the police and these guys that were running back in when we didn't know if the shooter was still there or not and grabbing people from the ground and dragging them out," she told CNN.

"I just sat with him," Gooze said. "I would like to think, if it was me, somebody wouldn't let me sit there alone."

Las Vegas stranger took bullets so others could live

Amy McAslin and roommate Krystal Goddard dived under a table as gunfire rained down on fellow concertgoers in Las Vegas on Sunday night. Eventually, McAslin realized she was being shielded by someone who'd just been shot.

"Just truly incredible, (a) stranger, jumping over me to protect me."

The man was among the many who attended to others during and after a massacre in which a gunman fired from the 32nd floor of a Vegas hotel into crowds below at the Route 91 Harvest Music Festival, killing 59 people and injuring another 527.

Before the shooting began, McAslin and Goddard were standing by the stage where country music singer Jason Aldean was performing. Then they began to hear gunfire.

Running for their lives through the crowd, the pair sought refuge under a table as the bullets continued to fly by.

The man shielded McAslin, who was holding Goddard.

It's not clear when the man was wounded. But he "said that he had been shot in his rear-end area, and that there was a lot of blood," McAslin said.

The roommates said the trio held onto one another tightly, while chanting: "Everything is going to be OK."

While under the table, McAslin, who had trained as an emergency medical technician, examined a woman who had been grazed by a bullet in the neck. "There was a lot of blood. But she seemed OK -- it didn't hit her artery," she said.

Eventually, they say, a woman told them to come out. The man was helped to a triage area, and McAslin and Goddard ran with others toward an exit.

McAslin's white shirt was stained by the man's blood. Neither knows his name or how he is doing.

"He's been in my thoughts all day," McAslin said. "He's a truly amazing person for just trying to protect the whole, under, the whole table area where we were."

Lindsay Padgett and her fiance Mark Jay were at the Route 91 Harvest music festival when the shooting started. After initially ducking to the ground, they told CNN affiliate KTNV they ran with others to a nearby airport hangar for shelter, before making it back to their parked truck near the concert venue.

They were driving away in their pickup, taking stock of what happened, when a stranger hailed them.

"Right now, we need your truck. We just need to get people over to the hospital, OK?" the stranger tells Padgett, as people moved the injured on makeshift stretchers behind him, in a video widely viewed on Facebook.

The couple pulled over.

After people loaded a number of wounded in the back of the truck, the pair said, they drove over road blocks and curbs until they found an ambulance at a freeway entrance.

Some victims were transferred to the ambulance. A couple others remained in the truck, and Jay and Padgett drove them to a hospital, following the ambulance.

One of the passengers, Jay said, had been shot in the chest and was using his fingers to fill the holes.

Padgett played down couple's role in ferrying the injured out of danger.

"I just feel like that's what you do," she told KTNV. "When people need help, you have to take them to the hospital."

An off-duty nurse from Orange County, California, told KTNV that she ran back into the danger to help rescue those who had suffered gunshot wounds.

"We went back because I'm a nurse and I just felt that I had to," the woman, who identified herself only as Vanessa, told KTNV.

"I went to three different scenes. The first one was OK. The second one was worse. And by the time I got to the third one, there was just dead bodies.

"There was so many people, just normal citizens, doctors, cops, paramedics, nurses, just off duty. Everyone was just communicating and working together.

"It was completely horrible, but it was absolutely amazing to see all of those people come together."

In the midst of the shooting, 18-year-old Addison Short tried to make a run for it.

She dived into a bar for cover: "You kept hearing gunshots. They just weren't stopping," she said.

From her hospital bed, she told CNN how a man used his belt to wrap her leg in a tourniquet and rush her to safety.

"He just picked me up and threw me over his shoulder," Short said.

The man carried her to a taxi that took her to the Sunrise Hospital and Medical Center in Las Vegas, where she was being treated Monday.

"It was just the scariest experience of my life," Short said.

Meanwhile, as the crowds began to scatter, Mike Cronk stood his ground and tried to help his friend who had taken three bullets to the chest.

"Most people started scattering and they climbed the fence, but I had to stay with my buddies," he told ABC News.

"We got him over the fence once the firing stopped and slid him under a stage so we were safe.

"My first thoughts were for my buddy. I wanted to make sure he was taken care of. But, you know, we were pretty much yelling at everybody to stay down. That was what we needed to do."