The first national study looking into the injuries associated with laundry pods was published Monday.

CHICAGO (WLS) -- Laundry detergent pods were launched in the U.S. market in early 2012. Since then, thousands of young children have suffered potentially dangerous exposure to the product after mistaking the pods for candy.

"When these pods started became so popular, we started getting calls about these serious symptoms," Pallasch said.

Nationally, 700 children have been hospitalized due to the detergent packets and there have been 17,000 calls to poison control centers involving kids under age 6. So far this year, the Illinois Poison Center has had 449 calls.

"If they bit into this thing, they cough and they choke, and this gets into their lungs. This causes respiratory difficulty and they are unable to breathe," said Pallasch.

The squishy detergent pods are often brightly colored and small. The innocuous looking little cleaning products have become more concentrated and the liquid inside them can cause problems if ingested, or if it gets on the skin or eyes. In most incidents, the child was not seriously injured but at least one death has been reported.

Last year, Erica Johnson's grandson ended up in the hospital for four days. She says he had chemical burns internally from biting into a pod. At the time, she was doing laundry and he was 15 months.

"I didn't know at the time that these things were as toxic as they are, or I would definitely have handled them differently," Johnson said.

Johnson started an online petition for individual packaging of the pods. Unless the manufacturers change packaging and/or formulation, Johnson and poison information experts urge parents to give up the pods and go back to liquid or powder detergent. 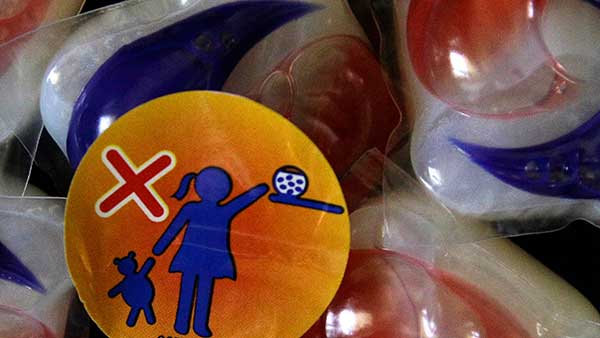