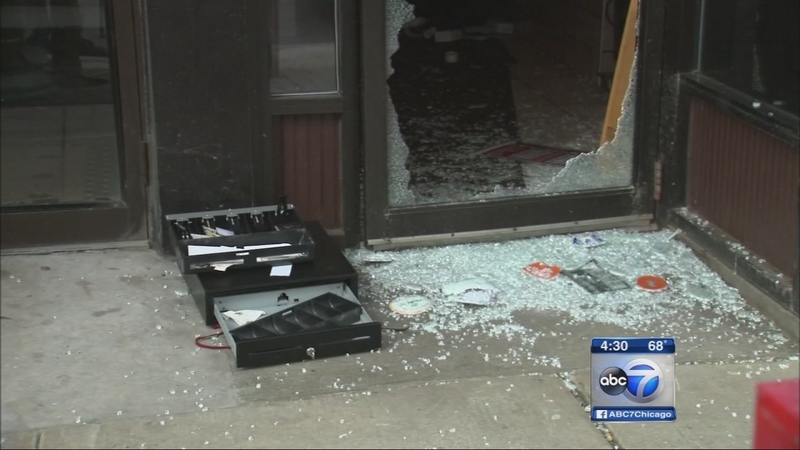 CHICAGO (WLS) -- Businesses in Chicago's Lincoln Park neighborhood are cleaning up after burglars left a trail of damage throughout the neighborhood.

At least four businesses were hit along Clark and Halsted streets. Bacci Pizza owner Iggy Colella cleaned up his eatery hours after the Lincoln Park restaurant was burglarized early Thursday morning near Halsted and Wrightwood.

"He was after cash. He came in, he knew exactly where he was going. So, he grabbed it and got out in three, four, five seconds, maybe he was inside," Colella said.

The restaurant's security cameras captured the brazen break-in. After 5 a.m., surveillance video shows the thief walking past the pizzeria a few times before, smashing the front door glass with a rock. Minutes later, the would-be burglar can be seen rifling through a cash register then running away.

It's one of several burglaries reported in the North Side neighborhood. Angela's Burritos was hit, too. Workers arrived to find the cash register on the ground outside the restaurant in the 2500-block of N. Clark.

"I know it happens in other stores before, they're robbed like this. They're looking for money," said Gurco Bautista, Angela's Burritos.

Police are investigating at least four break-ins in the neighborhood in the 2400- and 2500-blocks of N. Clark and in the 2500-block of N. Halsted. Officers found stolen items all over the area from the businesses that were ripped off, including items from inside the House of Wings. Owner Joe Bak didn't want to say how much cash the thief got away with.

Some business owners blame a lack of police presence for the crimes. Kim Schilf, president and CEO of the Lincoln Park Chamber Of Commerce, urged merchants to properly secure their businesses while reminding everyone that no neighborhood is immune from crime.

"We're concerned about the crime, but we know Lincoln Park is safe for visitors and residents," Schilf said.

Police are still investigating. No one is in custody.