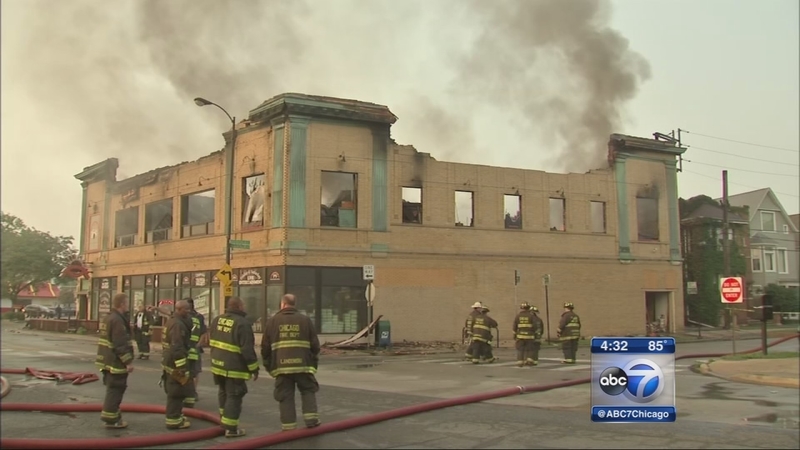 CHICAGO (WLS) -- Investigators are trying to determine what sparked a three-alarm fire that ripped through one of Chicago's oldest bowling alleys overnight.

ATF spokesman Tom Ahern tweeted that ATF, Chicago Fire Department's Bomb and Arson Unit and the Office of Fire Investigations were jointly working to discover the cause and origin of the blaze. 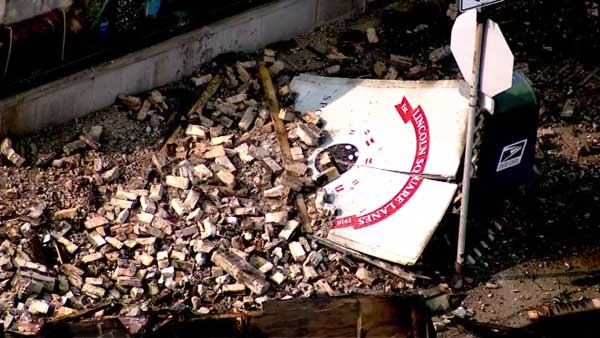 Firefighters said the fire began on the second floor of the building, which had housed the nearly century-old Lincoln Square Lanes since 1918.

When firefighters arrived at the scene near Lincoln and Western avenues around 12:40 a.m. Monday, they saw flames shooting through the roof of the building and quickly elevated the alarm. A mayday alert went out early when crews thought one firefighter went missing, but he was found soon after. One firefighter suffered a minor burn, but no one was seriously injured.

Crews had a difficult time getting inside because the structure was overtaken by fire and the structure was unstable. Firefighters battled the blaze from outside. After the roof collapsed, crews alternated between pouring water on the flames and letting them smolder.

The same family has owned Lincoln Square Lanes for the last 30 years. David Drehobl, one of the owners, could do nothing but watch as his family business went up in flames.

He said the kitchen closed around 10 p.m. Sunday and managers closed the bowling alley around midnight. The fire broke out less than an hour later.

"My father has owned it for 27 years. We bought it from my father. My family did - my brothers and my cousins. We rehabbed it and put a lot of money into it about it three years ago. We made it into a real fun place," Drehobl said.

The bowling alley closed briefly in 2012 when the family installed a new kitchen, a large stage and new bar.

"We invested a million dollars three years ago and it's all gone," owner Richard Drehobl said.

Community members were heartbroken to see a neighborhood landmark go up in flames. The building will likely be demolished on Tuesday, and many in the neighborhood will be sad to see it go.

"I hope it doesn't come to end up being a high-rise with apartments because this is part of the neighborhood, this is part of Chicago. That's a big loss," said Jim Mowery, a resident.

"It was absolutely beautiful up there. It's really a big part of the neighborhood and it's horrid that it's gone," said Matthew Kollar, Matty K's Hardware.

Matthew Kollar's business, Matty K's Hardware, is also gone. He opened up on the first floor of the building four years ago, and counted Steppenwolf Theater - which would buy materials for sets - among his customers.

Now, he and the Drehobl family are wondering what to do with their businesses.

David Drehobl said his family has insurance on the business, but said it's too early to know if they will rebuild. A farewell message was posted to the Lincoln Square Lanes Instagram account Monday morning.

"It is with heavy hearts that we bid our customers a saddened farewell. We will cherish the memories you have left us with. It is our hope that this historic alley will remain in your thoughts. The LSL family would like to thank you for your continued love and support as we look forward to the future," the message said.
Related topics:
lincoln squarebuilding fire
Copyright © 2022 WLS-TV. All Rights Reserved.
RELATED
PHOTOS: Fire destroys Lincoln Square Lanes
TOP STORIES
Chicago police coming down hard on retail theft rings
Conjoined twins separated after 10 hour surgery
Retired CPD officer, 57, killed in Edison Park hit-and-run
Weber Grills apologizes for ill-timed meat loaf recipe email
Family of man who died falling off party bus reaches settlement
Ring camera captures fiery I-80 semi crash that injured 2
2 NYPD officers shot, 1 fatally, responding to domestic violence call
Show More
Chicago Weather: Morning flurries, cold Saturday
Maryland man dies with more than 100 venomous snakes in his house
Man who got double lung transplant after COVID survives 2nd case
Laundrie claimed responsibility for Petito's death in notebook: FBI
Man killed in Hampshire explosion ID'd; 1 other critically injured
More TOP STORIES News