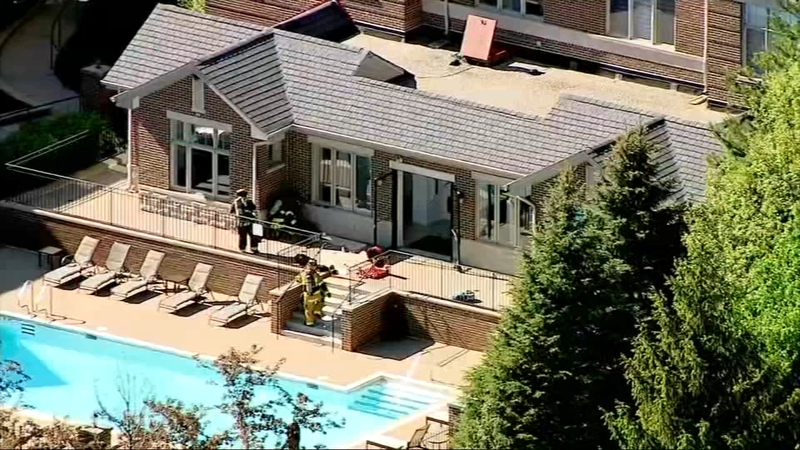 LINCOLNSHIRE, Ill. (WLS) -- Officials said 14 people were treated for exposure to toxic fumes as the result of a hazmat situation at a community pool at an apartment complex in Lincolnshire.

The Lincolnshire Police Department said officers responded to a community pool at 445 Village Green at about 2:20 p.m. for reports of two unresponsive teenagers, one male and one female.

When officers arrived, they found the two teens unconscious but breathing. They were taken to Lutheran General Hospital in serious condition.

Police said their initial investigation suggests there was possibly a chlorine gas leak or a carbon monoxide leak from servicing to the pool earlier in the day. The situation was treated as a hazmat situation, police said.

"Suddenly everybody seemed to converge on the place, I must have counted 15 to 20 different squad cars and ambulances," said Gordon Benkler, apartment complex resident.

Firefighters and hazardous material teams focused on the clubhouse near the pool where the boy and girl were found. Some of them inhaled the poisonous fumes in the process.

A total of 14 people ended up being transported to area hospital for treatment after exposure, fire officials said: six police officers, four firefighters and four civilians, including the two original victims.

Fire officials said none of the first responders have life threatening injuries, and the teens are also doing better Thursday evening.

Residents in the immediate area were notified and asked to stay indoors with their windows closed and ventilation systems off until told otherwise.

Fire Chief Tom Krueger said two of the devices they use to measure hazardous materials at the pool were broken due to the high levels of poisonous gas in and around the clubhouse and pool.

"All the corrosive gas melted and corroded this whole inside bolt there," he said. "Made it inoperable."

He said in his 19 years on the job he had never seen anything like that before.

He offered some advice for the summer season.