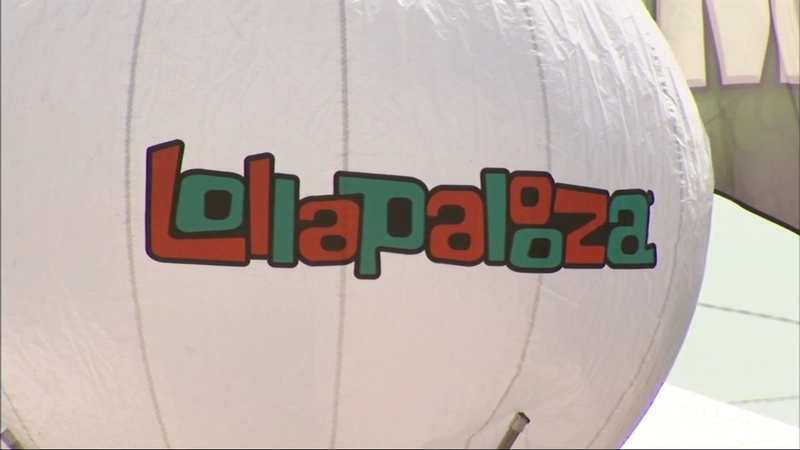 CHICAGO (WLS) -- Lollapalooza returns to Grant Park on Thursday for four days of live music, and this year there are new rules and tighter security in place.

The festival will be open from 11 a.m. to 10 p.m. each day. All ticketholders can reenter the festival three times each day.

About 100,000 people are expected to attend each day of Lollapalooza. Security at the festival will be tighter than it has ever been before. There will be additional concrete barriers, new item restrictions, airport-style screenings and an increase in undercover police officers.

"We have four times as many plain clothes officers that will be there. We've talked to the businesses and hotels in that area and we'll be looking at rooftops and we'll be looking from the sky so we have enhanced security out there this year," said Chicago police Superintendent Eddie Johnson.

Lollapalooza returns to Grant Park on Friday for four days of live music, and this year there are new rules and tighter security in place.

The security enhancements come in part as a response to the October 2017 mass shooting at a Las Vegas music festival in which 58 people were killed and more than 800 were injured by a lone gunman who opened fire from the 32nd floor of the Mandalay Bay Hotel and Resort.

It was later revealed the same gunman had reserved two rooms at the Blackstone Hotel on Michigan Avenue during Lollapalooza 2017. He never showed up.

"We have met with the Blackstone on numerous occasions this past year, most recently last Friday, so we have been in contact with them. We're comfortable with the plan they have in place," said Rich Guidice of the Office of Emergency Management and Communication. "We talked about making sure you know who's coming to your hotel, making sure you're at least once a day checking inside all of these rooms."

City officials said the same conversation has been had with every hotel lining Grant Park. They said while no credible threat has been leveled against Lollapalooza, they have to be ready for every possible scenario.

"We're going to have spotlights shining in those hotels and we have plans in place that if there was some sort of a similar type event, we have people right on site to storm the room and take out the threat immediately," Riccio said.

"For them to be vigilant in terms of what people are bringing in and out of the hotels. Public safety is everyone's responsibility," said Supt. Johnson.

Although festival organizers say fans are not allowed to bring in alcohol and the city promises to strictly enforce laws against underage drinking, some area hospitals are preparing for increased number in ERs of medical emergencies related to binge drinking.

"There is just a dramatic rise in alcohol-related visits to emergency rooms throughout the city of Chicago during Lollapalooza weekend," said Dr. Robert Tanz with Lurie Children's Hospital.

Attendees who are bringing no bag can enter through a no bag express security lane. Anyone with a bag must enter through the bag lane, and should expect delays.

This year attendees will also not be allowed to bring any outside liquids into the festival. Empty containers and hydration packs will be allowed. Free water will be provided throughout the festival at hydration stations.

"We're added even more free water filling stations throughout the park so we encourage everybody to bring a refillable water bottle," said Lollapalooza spokesperson Brooke Leal.

Mayor Rahm Emanuel said that in response to the changes, 20 percent more hydration stations will be located throughout Grant Park.

Cooling buses will also be available at the festival.

Street closures go into place Monday night. The following streets will be closed through Thursday, August 9, due to the music festival:

Metra and the Chicago Transit Authority will be adding service and expanding capacity to help attendees get to Lollapalooza.

Metra will provide extra trains and adjust schedules on most lines to help accommodate demand, officials said. The CTA will add service on rail lines and bus routes, including those that bring riders to Grant Park from Union Station and Ogilvie Transportation Center.