Lollapalooza fan says she was trampled during Travis Scott set 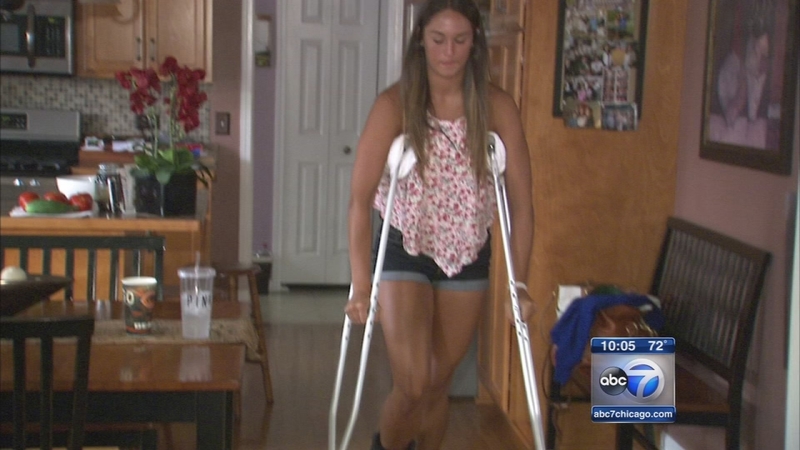 Teen says she was trampled at Lollapalooza

CHICAGO (WLS) -- Officials said no one was hurt when performer Travis Scott told fans to jump the barricades on Saturday night, but a 15-year-old girl says she was trampled and may have broken her leg.

Maddy Ryley, 15, is getting around on crutches and wearing a boot on her foot. She's been unable to walk since Saturday, when she suddenly found herself at the bottom of a pile of fans who rushed the stage during rapper Travis Scott's set at Lollapalooza.

Scott played just one song before reportedly exhorting fans to ignore security and get on stage. As the crowd surged forward to the stage, Ryley says she was knocked to the ground.

"People started falling and a bunch of people around me fell. And I ended up at the bottom of that," Ryley said.

Maddy says she couldn't get up until a group of friends picked her up and carried her to the medical tent. Security stopped the show, and according to Chicago police, Travis Scott fled the area. He was later arrested and charged with disorderly conduct.

"More people could have been hurt. He really didn't have a right to do that," said Lin Miller, Maddy's aunt.

Maddy and her family have been going to Lollapalooza for years and say they've never seen anything like what happened Saturday.

"From the way the crowd was, I'm sure more people did get hurt as well, just because it was just insane what was going on, all the pushing," Maddy said.

Lollapalooza organizers said they're unaware of any injuries related to the Travis Scott performance. Scott, whose real name is Jacques Webster, has another appearance scheduled in Chicago on August 31 - in front of a judge to face disorderly conduct charges.