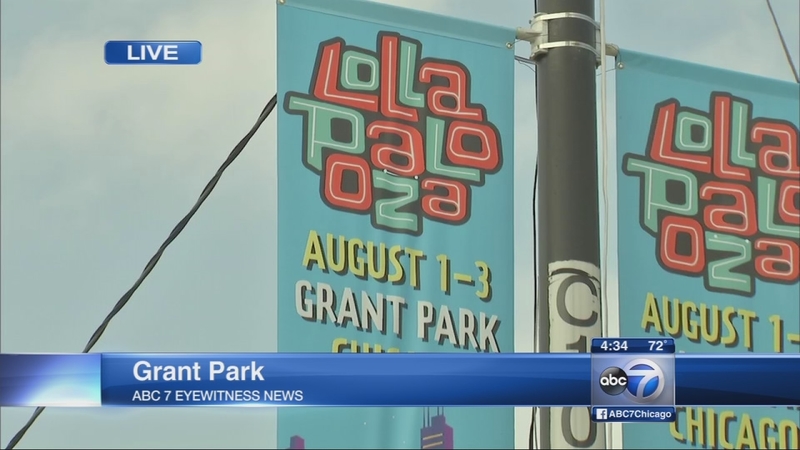 CHICAGO (WLS) -- Lollapalooza kicks off its 10th year in Chicago on Friday- and preparations for the huge music festival are well underway in Grant Park. Headliners include Eminem, Outkast and Kings of Leon.

Streets are closed in the area and security is tight at Grant Park. The three-day festival includes 130 bands on eight stages. Lollapalooza has grown over the years, but organizers say they want to stay true to the festival's roots.

"It's really a passion of ours, artist discovery, so we want people to come early and see bands they've never heard of and leave super fans," Lindsay Hoffman said.

"We are very into the idea of being an international music event," Lollapalooza founder Perry Farrell and lead singer of Jane's Addiction said in a recent interview. "But I would have to acknowledge that if it were not for Chicago, that beautiful showroom, I don't think we would be in the position we're in now."

Lollapalooza toured cities in its early years, but then settled on Chicago in 2005.

"It's become a global image-builder for Chicago," said Don Welsh, president and chief executive officer of Choose Chicago, the city's tourism and convention organization. "Lollapalooza has become synonymous with Chicago."

About 300,000 people are expected at the festival this year.

"It's $100 million it brings into Chicago's economy lots of jobs. And it markets Grant Park around the entire world," Bob O'Neil, Grant Park Conservancy, said.

This year for the first time the city and Lollapalooza promoters worked with tourism partners in international markets to make tickets available for music fans around the world. Proceeds from Lollapalooza pay for park improvements, as well as educational and cultural programs.

With an even this large, there's always the effort to make sure things run smoothly and attendees are safe. In 2013, nearly two dozen people were treated for drug overdoses. Stroger Hospitals will be fully staffed this weekend in anticipation of any problems.

"We usually get a heads up from EMS," said Dr. Steven Ak, "and speak with law enforcement to know what's out there on the street."

From his point of view, Farrell says Chicago offers him "no plug-ups or bottlenecks."

"Just being in the presence of Chicago we look damn good," Farrell said. "I have nothing but praise and adulation and I want to do Chicago right."