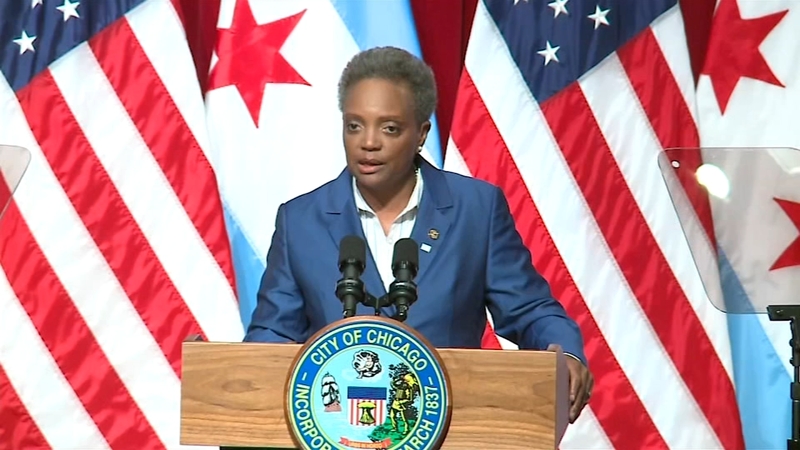 'Nothing off the table' in addressing deficit, Lightfoot team says

CHICAGO (WLS) -- Politicians including some of Mayor Lori Lightfoot's former opponents are reacting to her first State of the City address, in which she said the city is facing a deficit of $838 million.

Mayor Lori Lightfoot spoke about ways to address Chicago's budget deficit in her first State of the City speech Thursday.

The mayor made it clear Friday that she is not looking at a commuter tax on those coming into the city, but different ways to address congestion. She also pushed back at progressive council members asking for a corporate head tax.

A primary concern is that Lightfoot will have to raise property taxes. She suggested in her speech Thursday night that there will be hard choices that have to be made in order to fill that $838 million hole.

"If we don't secure this casino and the revenue it creates, we will be forced to make painful choices on finding other revenue sources and we all know what those are -- the sources we wish to desperately avoid," she said.

"To raise property taxes to the level that we would need to address our budget deficit for the next year would be devastating to the city," Lightfoot explained Friday. "I can't take that off the table, but boy oh boy would want to avoid that."

Dr. Willie Wilson, who ran against Lightfoot and threw his support behind her after the primary, urged the mayor to avoid raising taxes.

"People didn't vote for her to come into office to raise taxes on them and make them leave the city of Chicago," Wilson said.

Lightfoot said the $838 million deficit was trimmed down from a $1 billion deficit she inherited. She's looking at a graduated real estate transfer fee and some form of congestion tax to help address it, but made no mention of TIF reform, which some progressives are pushing for.

"We need to ask the big powerful corporations to pay their fair share. We can do that as a city by reinstating the corporate head tax that Mayor Rahm Emanuel did away with by going after the TIF funds, clearing those out and making sure that money goes toward public need," said 35th Ward Alderman Carlos Ramirez-Rosa.

Friday she pushed back on those demanding TIF reforms and certain other corporate taxes.

"We're in the process of doing TIF reform, from top to bottom, and we'll be rolling out a package of reforms later this fall," she said. "I don't favor a head tax, I don't favor a LaSalle Street tax."

She also said her congestion plan does not involve a commuter tax.

"Obviously rideshare's got to be part of the conversation, but we're going to be putting forward a package of ideas that are going to be designed to deal with congestion, traffic pollution, the wear and tear on our infrastructure, and provide a revenue stream for us," she said.