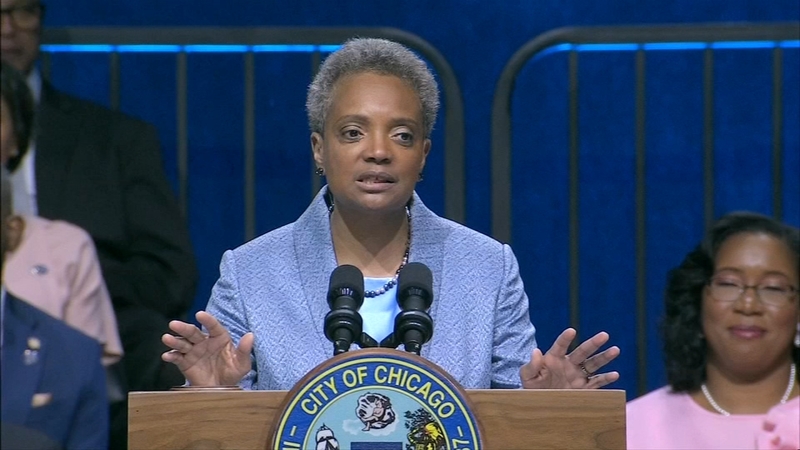 CHICAGO (WLS) -- In a historic moment, Lori Lightfoot was sworn in Monday as Chicago's 56th mayor, the city's first African American woman and the city's first openly gay person to hold the office.

"We're a little bit closer as we celebrate that for the first time in the history of Chicago, women of color now hold all three city-wide elected offices," Mayor Lightfoot said during her inaugural address.

Thousands of people gathered at Wintrust Arena in the South Loop for the free event, though attendees had to be registered on Lightfoot's website for a ticket.

Lightfoot's family flew in from all over the country for the ceremony. There was also a host of dignitaries in attendance, including outgoing mayor Rahm Emanuel, Senator Dick Durbin and Senator Tammy Duckworth.

Her voice broke as she thanked her mother, 90-year-old Ann Lightfoot, for the sacrifices she and her late father made for their family. The new mayor thanked her mother for empowering her, teaching her that nothing could hold her back from achieving her dreams.

When new Chicago Mayor Lori Lightfoot thanked her mother for empowering her from a young age, for teaching her that nothing could hold her back from achieving her dreams.

"There's one person you're about to meet who laid the foundation for everything that I am today. She's my role model, my champion. The woman on whose dreams and high expectations propelled me through life, my mother, Ann Lightfoot.

"My mother and my late father, Elijah, gave us the best they could, in the town that we grew up in, even when they had almost nothing left to give. As parents, they led by example. They instilled in me a clear set of values: loyalty to family, friends and community, and the importance of hard work, education and integrity.

"Mom, most importantly, you and dad told me that I could be anything that I wanted to be. That I could not be held back by my race, gender or family financial status. That I should hold my head up high and not let anyone else dictate my destiny or my future. That no goal was out of reach. That no victory was too unlikely to pursue.

"I feel my father's presence here today. My gratitude to you both has no limit. Just like when I was a little girl, I'm working hard to make you proud, to honor your sacrifice, to live by the values you instilled in me, to make sure that families like ours don't have to struggle like we did," Lightfoot said.

LIGHTFOOT LAYS OUT PRIORITIES DURING INAUGURATION

In her inaugural address, Lightfoot said Chicago's problems will not be solved overnight or by one person.

"We must be in this together," she said. "Our challenges can only be solved if we face them together. We cannot fail, we will not fail; we are Chicago."

She laid out her hopes and goals for a better Chicago; the four stars in the city flag given new meaning in her administration. The first two, for her, are symbolic of safety and education.

"In this moment I cannot help but look at all of you and think about what lies ahead and what we can be together," she said. "I'm looking ahead to a city of safe streets and strong schools for every child, regardless of neighborhood or zip code."

Lightfoot said she wants to bring stability to the city's finances. And while she did not reference former mayor Richard M. Daley, who sat behind her, she said for years Chicago has dug itself into a fiscal hole.

The fourth star, Lightfoot said, stems from a theme of her campaign: bringing integrity to city government.

"Putting Chicago government and integrity in the same sentence, sometimes may seem a little strange. But friends, that's going to change, because it's got to change," she said.

One of her first acts as mayor was to sign an executive order to begin the process of curbing aldermanic prerogative. It's a practice that has given City Council members near autonomous power in their wards and has been ripe for abuse.

Lightfoot said the longtime practice has given aldermen too much control in their wards and led to corruption.

"We want to make sure people understand that they're entitled to good basic city services, and they don't have to give more to get that," she said.

Lightfoot drew cheers during her inauguration speech when she said no city official should ever profit from his or her office. She talked about bringing Chicago together, and borrowed from a church hymn as she promised to those in need that Chicago will not pass them by.

She also challenged everyone to do their part to make this a better city.

As the new mayor, Lightfoot faces a host of challenges.

"She's got a $700 million budget gap to fill. She has got contract negotiations with police, fire and the teachers union. Summer is coming. She has to worry about street crime and violence and she doesn't have a lot of time to organize any of that," ABC 7 Political Analyst Laura Washington said.

Lightfoot is standing by her policy of openness, transparency and change. Residents are counting on that.

David Zalig worked on Lightfoot's campaign, and wanted to be there to watch it all come full circle.

"I believe in areas such as crime and finance, she is going to do really good. She has the experience, police accountability board, so it looks good in those areas - in all areas really. She has some really good ideas," Zalig said.
A summer violence prevention plan is another priority, particularly with the Memorial Day weekend coming up. Lightfoot is promising to flood traditional trouble spots with police.

Also on her agenda and dealing with the affordable housing shortage and coming up with a plan to deal with downtown congestion caused by ride share companies, which she says have contributed to Chicago no longer having a rush hour, but a rush day.

Just a few hours into her term as Chicago's mayor, Lori Lightfoot opened her office doors to meet the public.

Monday afternoon Lightfoot held an open house at City Hall. She was joined by her wife Amy Eshelman in greeting members of the public on the fifth floor. People posed for a quick photograph, and then were taken to the fourth floor where they were treated to some Eli's cheesecake.

Lightfoot campaigned on a platform of change, and spoke during her inaugural address about improving the quality of life in the city's neighborhoods and of being a true people's mayor. Many who came to City Hall said they're rooting for her.

"It was just really wonderful to be able to say hello to her, and to both of them actually, and just wish them luck and congratulate them," said Gerry Keane.

"I think this new mayor is diverse for the city and going to be a great city to live in. She wants to do things for everyone, and I think that's what we need," said Benia Davis.

The line was long; at times it was three rows deep in the lobby of City Hall.

"I told her we have your back. And unbelievable. 50 wards. 50 wards. That's a miracle that all 50 wards voted for her," said Cori Hinton.

Former President Barack Obama congratulated Lightfoot on becoming mayor in a video tweeted by his foundation.

"Chicago's best days are still ahead." A message of congratulations from President @BarackObama to @LightfootForChi and the new @ChiCouncil members on their inauguration today: pic.twitter.com/x4bzde3rBt

"I applaud the new mayor and her message of working together to make our city better. She has my commitment and support. I hope to be an ally and advocate for Mayor Lightfoot as she tackles the challenges we face and works to ensure our city is the greatest anywhere," Cullerton said in a statement.

The Ohio native came to Chicago in 1986 after being accepted on a full scholarship to the University of Chicago Law School.

Lightfoot has never held a political office was formerly an Assistant United States Attorney, President of the Chicago Police Board and Chair of the Police Accountability Task Force.

Lightfoot lives in the city's Northwest Side with Eshleman and 11-year-old daughter Vivian.