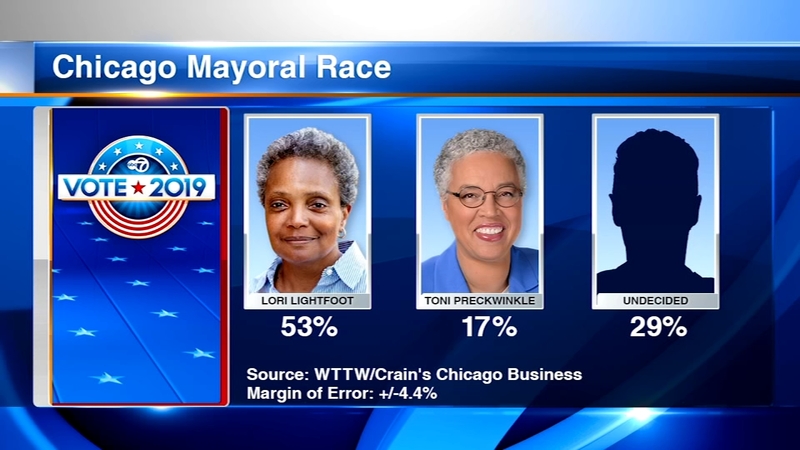 The debates are the final chances that each candidate will get to appeal to voters ahead of the April 2 election next week.

Just a week ahead of the election, a new poll shows a wide gap between the candidates. A poll by WTTW and Crain's Chicago Business shows Lightfoot with a 36-point advantage over Preckwinkle.

Both candidates downplayed the poll during Monday night's debate, instead focusing on getting the vote out over the next week.

Preckwinkle was asked what it means that none of her former rivals has backed her, while seven have endorsed Lightfoot.

"The endorsements that matter are those of the voters on April 2," she said.

Lightfoot believes voters will bring her a victory next week.

"What I've been hearing from voters all over the city, in every neighborhood that I've been to, is that they want a change but that they didn't think that it was truly possible," she said. "I think what the people understand is that the status quo has failed them."

Preckwinkle was also put on the defensive during the debate when asked about controversial comments by Congressman Bobby Rush.

"If any young black male or female is killed by a police officer under a Lightfoot administration then the blood will be on those voters who elected her mayor of the city of Chicago," Rush said during a rally with Preckwinkle this weekend.

Congressman Bobby Rush has accused Lightfoot of having an unholy alliance, after getting the endorsement from Ald. Matt O'Shea, whose 19th Ward is home to many police officers.

Rush said Monday that he stands by his comments.

He also accused Lightfoot of having an unholy alliance, after getting an endorsement from Ald. Matt O'Shea, whose 19th Ward is home to many police officers.

"Lori Lightfoot has made an alliance with the devil, and that this consent decree under a Lightfoot administration will mean hollow at best," Rush said.

"Congressman Rush has expressed concerns about police misconduct, and the unfairness of our criminal justice system," Preckwinkle said earlier Monday. "I think those are legitimate concerns to address."

When pressed on Rush's comments during the debate, Preckwinkle would say only that, "Congressman Rush speaks for himself."