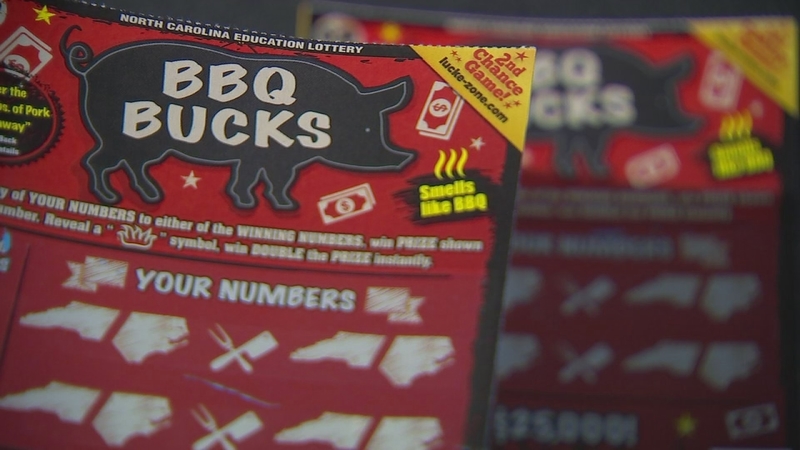 RALEIGH -- Just in time for football season, the North Carolina Education Lottery is kicking off a new game with a new scratch-off ticket that should smell like the smoky BBQ from your weekend tailgate.

"North Carolinians are wild about BBQ so we think this is going to be a great ticket," said Alice Garland, NC Education Lottery's Executive Director on Tuesday outside Clyde Cooper's BBQ in downtown Raleigh.

Usually priced at two bucks a pop, you can scratch and sniff and try your luck at the $25,000 top prize.

Even if you don't win, you can re-enter your ticket for a second-chance drawing that could get 100 pounds of pork and a Big Green Egg grill for cooking it up.

Garland said the BBQ-themed game is just a new way to keep people coming back for more. While she's hoping to put half a billion dollars toward education for the third year in a row, she urges people who play to do so responsibly.

"We say constantly if it's not fun- if you're not having fun anymore then you don't need to be buying anymore tickets," she said.

The lottery is also hosting the age-old debate over which style BBQ is best: East or west, on its social media accounts. Anyone 18 and up can vote by commenting "EAST" or "WEST" on Facebook, or using the hashtags #bbqbucks and #east of #west on Twitter. Those who participate could win a $50 gift card in weekly drawings.

For more information on BBQ Bucks and other games, visit the NC Education Lottery.