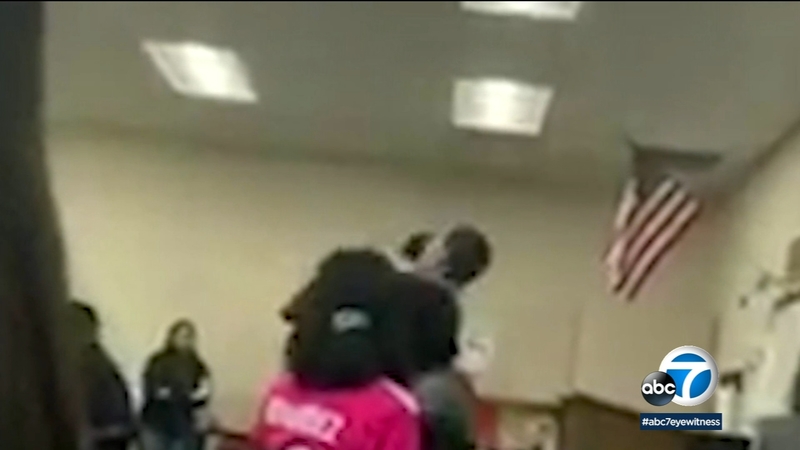 LYNWOOD, Calif. -- A Lynwood teacher has been placed on administrative leave after video surfaced on social media showing the teacher allegedly placing a 15-year-old student in a chokehold while trying to break up a fight in a classroom.

The incident, which is being investigated as possible case of physical abuse, occurred Oct. 10 in a Lynwood High School classroom, according to the Los Angeles County Sheriff's Department.

Sophomore Andrew Boyd said it all began after he was involved in a verbal argument with another student, whom he had previously asked to be separated from. That's when the teacher intervened and "physically restrained" Boyd, according to a written statement from the Lynwood Unified School District.

Footage of the incident taken by another student shows the teacher restraining a student from behind. The teacher lets go after asking the student several times what sounds like in the video as "are you calm?"

Boyd described being allegedly restrained by the teacher as "aggressive." He said photos taken after the incident show bruises left around his neck.

His mother, Wlette Jones, said she was not notified about the incident when she picked up her sons from school that day. However, the video was anonymously sent to her after the fact.

"I want to know that my kids are safe when I take them to and from school. When I put you in a gate, that's your job to protect them. They weren't protected and he wasn't given what's owed to him," Jones said.

The footage may be enough to file criminal charges against the history teacher, according to the family's attorney, Michele Dobson.

"For the rest of us, if we're placed in a chokehold, it's at least an assault and battery," she added.