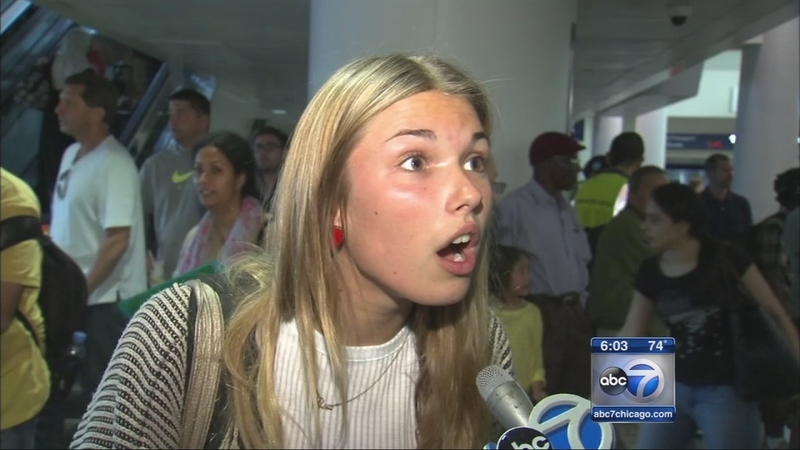 CHICAGO (WLS) -- Several airlines, including Delta and Lufthansa, are keeping their flights out of Ukrainian airspace on Thursday night. Many air travelers are keeping close tabs on the situation.

Aviation authorities in several countries, including here in the U.S., had issued warnings not to fly over parts of Ukraine prior to Thursday's crash.

O'Hare's Terminal 5 is usually full of international travelers on high emotion, off to exotic places or saying goodbye to loved ones. On Thursday, thoughts of Malaysia Airlines Flight MH17 were on travelers' minds as news of the crash spread. The reaction of travelers from Europe, especially those who had just left Amsterdam, was nothing short of visceral.

ABC7's Ravi Baichwal: "A Malaysia flight was apparently shot down over Ukraine."

"Terrible for all the people who are involved, it's just terrible. I was choked," said Ariane Vengeiin, as she arrived in Chicago from Amsterdam.

The responses were typical for those arriving from Europe, as other travelers steeled themselves to depart on international flights.

"As Americans, we don't realize what people in other parts of the world have to deal with all the time, so, I mean, we're pretty isolated here," said Julie Hobert, who was flying to Florence via Amsterdam.

Cathay Pacific, voted by a trade group as last year's No. 1 airline in the world, had a flight to Beijing out in the afternoon. Passengers were told they could switch their flight to another day if they were worried about flying.

Baichwal asks: "Are people any more stressed today than they are on any other days?"

"We haven't seen that so far, no. Nobody at the counter has been stressful, we haven't seen at the gate either so far. I think everybody understand what's happened, and the situation we have," said Andreas Hansen, duty manager, Cathay Pacific.

For the Moolji family, with dad and younger brother off to Hyderabad, India, there's faith in flying- and in something else.

"The chances of it happening are so insignificantly small, that we're not too worried or concerned," said Mohammad Moolji, traveling to India.