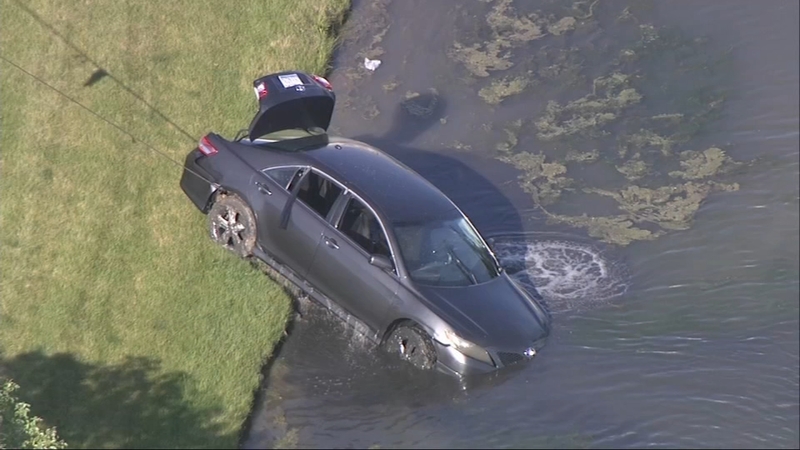 Man dies after car goes into retention pond in Libertyville

LIBERTYVILLE, Ill. (WLS) -- A 38-year-old man died Monday after he became trapped in his vehicle in a retention pond in north suburban Libertyville.

Libertyville police and firefighters responded around 4:45 p.m. to several 911 calls about a car floating in a large pond near US Highway 45 and Northwind Boulevard. The callers said the driver was still inside.

Several other fire departments in Lake County also responded to the scene. Rescue crews tried to put a lifejacket on the driver and pull him out, but a diver was sent in to rescue him when the car started to sink.
Fire officials said that at one point the car's trunk opened, which caused the car to sink quickly, and straight down.

Crews managed to get him out. He was rushed to Advocate Condell Medical Center, where he was pronounced dead.

The victim was identified as Abner Abdiel Melgar-Barrientos, 38, of Round Lake Beach, according to the Lake County Coroner's Office. A preliminary autopsy indicated that he drowned, however, it appears he had a medical event that caused his car to go off-road and into the pond, the coroner's office said Tuesday in a statement.

The cause of the crash remains under investigation. Witnesses told investigators the man may have suffered a medical episode.